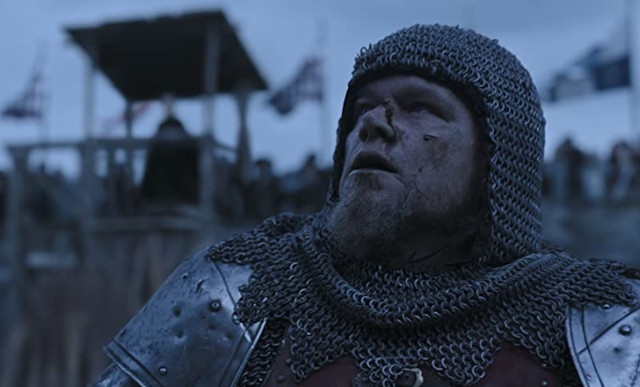 AT AN ACTUAL CINEMA, BABY!

While the cinema has technically been back, sporadically, throughout the bastard virus, this was my first film at one for about two years. Also, what has been on at the picturehouse has been uninspiring for a man of my tastes until recently. Ridley Scott’s The Last Duel sounded like precisely my cup of tea; swords, bloodshed, grand scale historical romp. Actually romp probably isn’t the right word given the plot.

Being in a cinema was weird. There was much about the experience of them which crashed into my consciousness almost the second I smelled the place. Nachos, popcorn, hot dogs- cleaning products and the comforting combination of the two in the screening room. I had forgotten that a film saying 17:10 on the ticket means it’ll actually start at 17:30 after adverts and trailers, so technically I was 40 minutes early for a 2 ½ hour film. More on that in a minute.

Adverts, boo, they’re annoying and useless but yes I do want a Wagamama’s please, just not a plant based one. Is there an all meat menu? Entrail noodles or something? Trailers, yay! Everybody loves a trailer in the cinema unless you’re me and it is for Wes Anderson’s new film with plinky plonky self importance and a litany of actors crammed in to make pithy remarks on an overly stylised set. It felt longer than The Last Duel’s entire runtime. 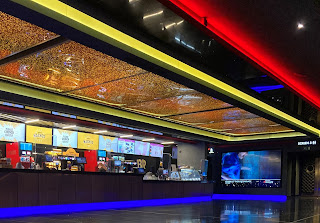 The biggest oddity of watching a film at the cinema was the most obvious- other people. Bedsit Cinema bends and bows to my every whim, both literally and figuratively. Not being in complete control was odd. People eat, rustle, make noise sure, as did I. But other people laugh at the same time, they gasp, wince and experience the film with you and even though none of you talk there’s a joy, a bond in that which sitting alone in your room can’t replicate: even with a projector.

The promise of something with a Gladiator revenge theme and Kingdom of Heaven conquest plot by the man who made them both had me salivating. Sod Bond, I’m sorry but the appeal of the lot of them died in me years ago. Based on a true story in late 14th Century France, Knight Jean de Carrouges (Matt Damon) accuses former friend, Squire Jacques Le Gris (Adam Driver) of having raped his wife, Marguerite (Jody Comer). Le Gris is the favourite of squealing, childish King Charles VI’s (Alex Lawther) cousin Pierre d'Alençon (Ben Affleck channeling John Malkovich as best he can).

Damon’s de Carrouges is charmless, pig headed and self important. Driver’s Le Gris is charming, confident and slippery. He has far more guile than his accuser.

I digress deliberately abruptly. When in the Bedsit Cinema watching a long film, if I need a wee I pause, go for a wee, and don’t miss the film or have to apologetically shuffle past anyone. At the cinema this is harder to avoid. On my return after a trip to the rather immaculate loos, I realised the modest screening room smelled a lot more of food, farts and people then it did when I’d left. I wanted a hot dog now, too. 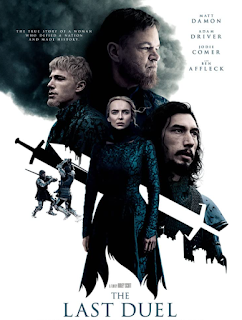 Still, it wasn’t as bad as my American Sniper mid film wee. In a huge screen where I was smack bang in the centre of the audience I fumbled my awkward way out, relieved myself, and then made the shockingly long journey past people back to my seat. Only to then discover I was about five rows up from my actual seat. Like any responsible cinemagoer I made a quick judgement call; annoy scores of people, or just the few you step over going down in a straight line. I could feel the eyes burning into my skull from behind me through the rest of the film.

The Last Duel is basically Me-dieval too. It’s a tryptic, told from three perspectives and climaxes on said duel. While there is action in it, I was a bit let down by that aspect. Do not expect Gladiator or Kingdom of Heaven. Though told from their perspectives I still found both main, male, characters to be arseholes. That’s what The Last Duel is about though, men being arseholes. I’m paraphrasing but one line drew an audible wince, “Rape is not a crime against a woman, it is a property dispute with the man who owns her”.

There are plenty of medievalisms which are really barbed comments on sexual attitudes today. While I enjoyed the story overall it’s really not that exciting until the finale, which very much is so. The Last Duel is quietly clever on perspectives but when you know that’s what’s coming it is the least you can hope for, and barring the final fight after a third of the film you know almost exactly what you’re going to see.

I didn’t go to watch The Last Duel for commentary on sexual politics, I wanted spectacle and violence (not sexual). That was the wrong approach. There is lots to admire and I enjoyed it overall, certainly the crescendo which is brilliant, but I didn’t love it. I did love being back at the cinema, though. 6/10

More medieval? Check these out!...