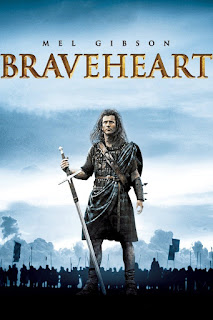 Tagline: “He who fought, fought for freedom.” Sounds like a tongue twister used to test sobriety in middle age Scotland (the 1970s). “Excuse me Sa, ye seem tae be swervin yae cart and oxen thar... Could yae jus repee aftae me...”

Oh bloody hell, the poster (not the poster used) has a different tagline, again. I have GOT to start reading the fecking poster first. Having said that, if they're all as tame as, “Every man dies, not every man truly lives.” then I won't bother. It sounds like the sort of thing one of the thick lads from school you've still got on Facebook for some reason would post right before a charity bungee jump. Live it up son; paper round at 5am. The Catford Gazette won't deliver itself, however often you ask it to.

Premise: There's a guy, and a country, and they go to war over something. Possibly the minimum pricing on alcohol units, or whose politicians get better paid in I'm A Celebrity. Mel Gibson, being a lunatic Neo Cat Aussie who hates the English (and Jews) takes centre stage as a man who hates the English. Scene set. Hollywood, I'm ready when you are, just spread it slightly and bend over, yeah, that's how I like it.

Anyway this Braveheart film, it's not like boxing is it? I mean it's history so of course there was never any surprise element, it is an exercise in telling a story. There's no surprises like in boxing. Braveheart didn't charge me £60 to watch James DeGale run out of ideas. Braveheart is an exercise in telling a story. But what do you take from it? Does the story of a midget Scot played by a similarly unendowed midget (allowing for inflation, they were shorter and less Australian then) tell us something about our current life? Does historical revenge porn lead us towards the light? No. No and it's not boxing either.

Braveheart changed my life, I'd never seen beauty and brutality juxtaposed so brilliantly. I'd never understood that one man's terrorist is another man's freedom fighter. I'd never seen Catherine McCormack's nipples in the shimmering cold dawn air of the the highlands. Braveheart opened my eyes to many things, and as I get older, less easily wowed and just generally more of a prick, Braveheart remains the same. It is my constant. It is less erratic than boxing, it is more stable than me. It is a lesson, but one in subjects which change depending on the me which watches it. Like the river, I am not the same twice. I may always be a cunt, but I'm a different cunt each time, and there's some beauty in that.


Bedsit it? I'm amazed you're still reading, but I thank you for it. I just wrote five hundred words on a film without telling you what it is about. One of the best films I've ever seen, looks fantastic on blu ray, too. 10/10
Labels: Action Bedsit Bedsit Cinema Braveheart Cinema Drama Film Mel Gibson Nudity Rated Review War