First scheduled for release in 2020, the sequel to A Quiet Place was waylaid by the bastard virus. I was hyper aware of this delay because during lockdown my commute to work led me past a poster for A Quiet Place Part II in London’s lovely, eardrum shattering tube system every day. From April until when lockdown ended (and before it had to start again) I walked past the beautiful faces of Emily Blunt and Cillian Murphy first thing in the morning.

As far as advertising goes, that’s a pretty impressive hit rate- 6 months of a captive audience.

Commuting, even with lockdown, isn't a quiet place; the Northern Line which I get is genuinely ruinous to one’s audial capability. The line reaches over 100 decibels several times in my 20 minute journey. I think Transport for London are due a lawsuit and a shell shock payout any day now. 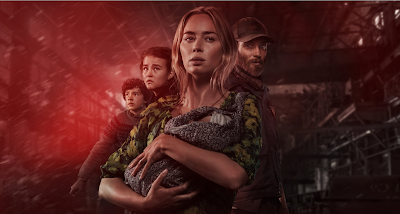 London Underground, not a quiet place. A Quiet Place Part II, still quiet. See the first film before the sequel, please. I hate saying that but it’s pretty obvious, the story is so closely related to the first film that it would spoil them both watching the wrong way round. The Abbott family still face the same, alien, sound hunting foes, but Part II also has some flashbacks from the beginning. Much like all good apocalyptic stories, monsters aren’t the only beasts, the sequel adds humans to the list of danger in the family’s world.

What I love about these films is that I’ve never been so scared of a noise- they’re so well done in that (literal) sense. The A Quiet Place duo are kind of the antithesis to a Michael Bay blockbuster. The problem with A Quiet Place Part II is that it rather predictably follows the first. There’s some expansion to the story but not really anything too clever. Despite that, it still very much entertains and has you holding your breath. As my old teacher used to say,

"You can hear silence".