After suffering through The Babadook and many other films all of which I’ve deleted from my memory like that time on the nudist beach with my family, I’m wary of hyped up “psychological” horrors. Like The Babadook, Relic is an Aussie film, which I didn’t know. This doesn’t matter of course, it’s just that I didn’t know it. I’d only bought Relic because of the good reviews and was fairly hopeful, despite it proclaiming itself a psychological horror.

Ghost stories scare me, truth be told, but gore doesn’t- I just love gore. Relic promised some shivers and I hoped, me wanting to put the light on. Ironically, none of the characters in the film know how to turn on a light. They have electricity in Australia, you know. I get that the dark holds more horror, though I do love a horror film set in daylight. Daylight is so much braver and done well, more rewarding. See Midsommar, The Devil’s Rejects, Raw and The Blair Witch Project. There’s more, but I haven’t reviewed them so I won’t promote them because I’m a self-serving bitch like that.

The theme and story in Relic is that of a woman, Kay (Emily Mortimer) and her daughter Sam (Bella Heathcote) struggling with their inability to deal with their matriarch Edna’s (Robyn Nevin) descent into apparent dementia. It is one I can identify with wholly. Four of my (many) grandparents ended up in care homes, dementia and Alzheimer's both featured heavily and it can be scary. Fortunately Relic isn’t exploitative, but finds the horror in the mystery that Grandma might not be Grandma at all. 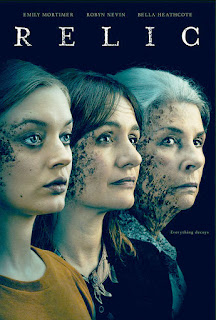 After an hour, though, I was starting to wonder, given past experience, that psychological is a byword for "fucking slow", but I held on. Obviously a very pertinent theme is the fear of death and ageing. The constant shots of black mould, slowly creeping and destroying is an apt visual metaphor. They might have noticed it poisoning the walls if they ever turned the bloody lights on. Youth, and light switches, are wasted on the young.

Two thirds of the way through (it’s never a good sign when I have to check how long I have left), I was only still watching Relic to say I watched Relic. There’s no beginning, middle and end- or at least there’s an opening scene and lots of other scenes but no real semblance of a story arch, which is kinda why I watch films, to see a story. It’s two acts, not three, where the first act isn’t really an act.

If they’d advertised it as a dark drama, Relic might have managed expectations better. Nothing really happens in dark (daylight) drama Manchester by the Sea, either. And it wasn’t in Manchester, which isn’t by the sea. Liverpool is by the sea, and they hate Manchester, so the whole title is an insult. But then...

Oh, wow! Suddenly Relic picked up with something of a twist. It’s relative to the boredom of the preceding faff, of course, but at least my perseverance was rewarded and the final third of the 90 minutes (note, not the third act).

Watching loved ones decay and die, the idea of them rotting is frightening and something most people don’t want to think about. Perhaps that’s what Relic’s horror is supposed to be, a parable to losing the person but still having the shell. You’re not you, but you’re still you and I know the next step is you not being here. That, dear reader, is probably the most depressing final paragraph I’ve ever written on Bedsit Cinema.

Relic misses the point. Essentially all horror hinges on our fear of death, and it is rescued from a three out of ten by its finish and efforts at playing on something new. The film has some merit but overall is mediocre and not scary in the least. 5/10 is me being generous. Just call me Santa.