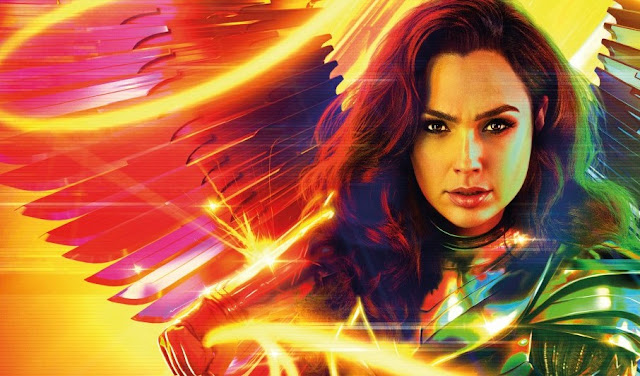 The first Wonder Woman film I can’t really remember. There was World War 1 at some point, which I always think is underrepresented in cinema as wars go, but that’s all I recall. Not a great sign, but the poster for WW84 (Wonder Woman 1984, not World War 84 which even the least cynical of us probably accept humans will be extinct before we reach) was all pretty and colourful. Always the sign of a good film good marketing. To be completely honest, I only rented it because I wanted to review it.

There have been some nice surprises in the past to this approach, though.

Back to WW84. I think the women (are they all wonder women?) are playing Quidditch briefly at the start of the film. I don’t watch Harry Potter and so I had to Google how to spell Quidditch. Apparently people actually (try to- there's no flying) play it in real life? Without looking any further into it lest I lose complete faith in humanity, I assume it’s just Lacrosse; that’s a rhetorical question, I really don’t care I just wanted to highlight it in a disparaging, fleeting thought.

Why is 1984 significant by the way? I don’t read comics so I am probably missing something. My notes say “look it up” but I can’t be bothered. If you can tell me, please do. It’s probably explained in the first film but like I said that’s dust in the wind of my mind. Wonder Woman, who has a real life alter ego Diana Diamond, sister of Dustin Diamond, has a magic rope which works like Spider-Man’s web sling and does all her superheroing in platforms. That’s all I have to say about that.

A few minutes into the film I checked its IMDb because that’s what I do and I noticed WW84 is TWO AND A HALF HOURS LONG. That’s a commitment you better like Wonder Woman for.

The start, with a post-Quidditch obstacle course that a young Wonder Woman (then just known as Screech from Saved by the Bell’s little sister) shows how prodigious a talent as a would be superhero she is, is fun. It was all downhill from there. There is a character who I think was supposed to be important but is best described as "Brian Cox wasn’t available" or more likely "Brian Cox knew the film would be a pile of shit and said no".

Chris Pine apparently doesn’t understand escalators? I don’t get it, who is he? Isn’t he Captain America? Captain America may have slept through escalators but even I know he’s Marvel not DC. Worse, Gal Gadot’s Wonder Woman is utterly benign, boring and not a character two and a half hours are worth. At no point was I made to give a shit about Wonder Woman 1984 except for briefly at the very start.

Even though I didn’t like the characters, there’s very little action in the film. I’d say you have to wait until the third act but the whole thing never feels as if it’s left the first.

Wonder Woman 1984 is a film I struggled to get through. The characters are bland, the small amount of action comes too late and doesn’t impress when it does (I saw The Matrix in the cinema so I’m that inured to slo-mo bullet dodging) and there’s zero humour. Unless you count Captain America not getting moving stairs and the fact that someone OK’d hundreds of millions of dollars on this pish.

When making a film the least you can aim to do is entertain people. I’m sure the makers of WW84 aimed to entertain. They just failed massively.

I don’t believe in an afterlife but I hope I’m wrong because the TWO AND A HALF HOURS I spent watching Wonder Woman 1984 will pale into insignificance compared to the waste of my already borrowed time. 3/10

There's been plenty of good films I've seen so far this year. Try these reviews...