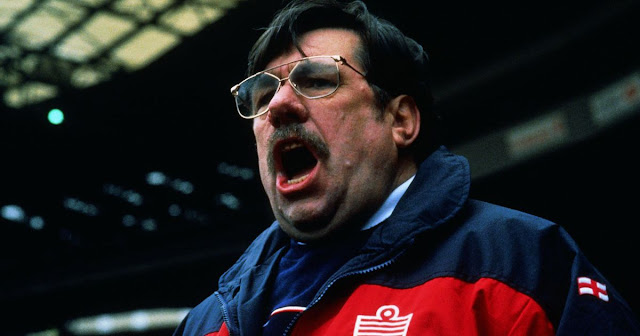 My first thought when putting on Mike Bassett: England Manager was, “Good Lord it’s twenty years old!”. My second was, “Fuck me is that really what the country was like in 2001? The cities, trains, cars and life in general look like they’ve barely left the 1970s.” To conclude, Mike Bassett is a little old, but seems to have dated faster than it has aged. It’s a comedy, sports mocumentary though, so will that matter?

Norwich City manager Mike Bassett (Ricky Tomlinson), by way of a rather lackluster, last minute appointment, becomes manager of the England football team. He’s woefully out of his depth and his lower league approach is instantly at odds with the millionaire players he’s charged with. His Assistant Manager is also a second hand car salesman, who spends time trying to flog loaded footballers used Daewoos, for example.

Mike Bassett: England Manager draws from real life personalities in the game at the time it was made (Gazza, David Beckham etc.) and most of the characters are in some way recognisable- if not as a specific person, then as a caricature. I think even twenty years on this still holds up and fans of the game now don’t need to be au fait with former teams, or football history buffs, to understand and enjoy the story. 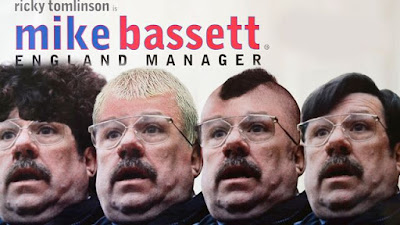 The film sports a very English sort of humour, and it is a very funny sort of humour; a wry ability to balance knowing faults to laugh at, but pick out some better traits to acknowledge, be proud of, and to laugh at too. It’s a great breakdown of English football, Mike Bassett. An out of touch FA, a floundering (but sympathetic in this case) Manager, a largely willing team but with plenty of faults and little cohesion, a press which doesn’t know whether to worship or crucify and fans even more fickle than the papers. Only more drunk and fighty.

Ricky Tomlinson is absolutely brilliant in the lead role, hilarious but balanced nicely with a pathos none of the other characters manage (but aren't meant to). Bassett's tragi-com is matched only by Pele, maybe, but I’m not sure Pele actually knows he’s in a film. I think he genuinely believes the real England team are in town.

For a domestic, spoof sports doc this is an exceptionally well put together production. Particularly the game scenes, where the makers do convince you that you’re watching a big football match, not 100 extras standing behind the dugout and only close ups. Mike Bassett: England Manager is not a film which ever had any aspirations to explode on any wider market than here in the UK, and for that it’s a far better film than it might have been. Very funny, a little oddball, and still a pretty relevant commentary.

A film willing to take the piss out of the English football games idiosyncrasies- for better and for worse. Overall a celebration of the odd discord the nation has with its most popular sport and all that surrounds it. Oh, and even at twenty, Mike Bassett: England Manager is bloody funny. 7/10

So it's sports films you want more of, erm, oh yeah, try these reviews!..