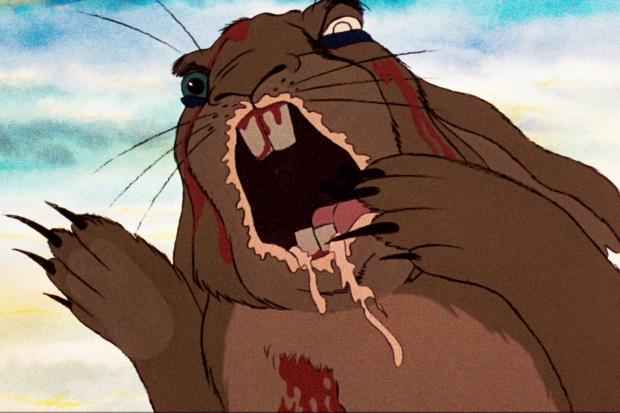 “All the world will be your enemy, and when they catch you, they will kill you.”

My love/ fear of the kind of cinematic trauma the eighties imposed on children is well documented. Watership Down was released in 1978 and if it is a good representation of that decade’s familial films then let’s just say it’s no surprise man eating Jeffrey Dahmer started murdering at that time. I’m not saying his wicked cannibal career is a direct result of seeing Watership Down, but similarly there’s no proof it isn’t. There is evidence that Jeffrey started with killing animals and it is true that rabbits are delicious, though. Therefore Watership Down caused Dahmer. Fact.

My Philosophy lecturer will love me for that little ignorance of logic. Here's a conundrum right back at you: what does Sisyphus dream of?

Despite the rather unsettling entrance to this review of Watership Down, which is rated U in the UK- universally suitable for all, the children’s film does have bunnies in it. Oh it’s so cute, all the wittle bunnies. Oh no, it’s genocide. Watership Down is instantly oppressive, cementing immediately its horrifying prognosis of utter doom (the opening quote being a perfect description of this). Rabbits are brutally slayed, on camera, in many ways, by every living thing. Including other rabbits.

As a kid we had a grey rabbit called Buster. Bastard would have been a better name. He was impossible to love, but similarly hard not to admire. A fox got in his pen once and he scratched at its eyes until foxy fucked off. All while we watched, stunned. His career high as a bastard and perhaps the dawn of my love of violence in a squared enclosure. I digress.

Watership Down is a trippy yet somehow awfully real, animated film about rabbits uprooted from their warren by those horrendous, earth destroying human beings- which at time of writing, you are. The animation, story and music melt, almost literally, into something which transcends its meagre existence. God (bunny God) is an arsehole (Old Testament bunny God) who wishes ill on everyone and particularly humans, who are death manifest. Sadly for (bunny) Moses Hazel and his escapees from a warren torn apart by machines, Old Testament bunny God ain’t parting no seas, and their quest to find a new happy place isn’t plain sailing. 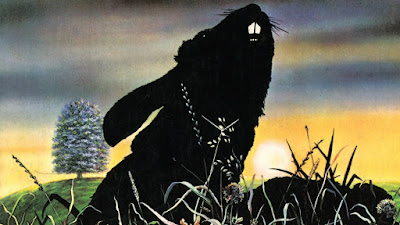 It’s like Babe: Pig in the City if someone let Gaspar Noe direct it, Watership Down. Its theme song, Bright eyes is hauntingly perfect. Of course the man who sang “hello darkness my old friend” (Art Garfunkel) was ideal to perform for a children’s film a song with the lyrics “following the river of death downstream”. Nihilistic is a little harsh description of the tone, but I suppose realistic is fair, if you are willing to accept bunny God and talking animals as realism.

The animation is fresh, very 2021. So fresh my six year old niece drew something almost exactly like Watership Down just the other day. Only less violent, obviously, because she hasn’t seen Watership Down yet and I’m banned from showing it to her. It makes me wonder, are we more or less enlightened about the world from this level of honesty about man’s impact on the environment and inter-species politics (mainly eating or being eaten and how much can we eat) or from the current, Frozen age of sing songs, “mild threat” and princesses?

Watership Down paradoxically carries both more and less weight now, part of that is down to it's now dated aesthetic, but its portent of doom is one which can’t be watered down. It is a fucking good story, miles ahead of its time, yet somehow not suited to the time it should be even more important in. A meditation on existence, or rather, ex-instance. You are but a dot. We all die, even and especially those we kill. Bye for now.

Still better than 95% of today’s films children can watch, Watership Down definitely aims to be a grown up story. Relentlessly, brutally honest, which I never thought I’d write about a cartoon with talking animals, and only doesn’t score higher because I’ve seen it loads and frankly the message has found its home- my therapist’s sofa. 7/10