My Neighbour Totoro (Tonari no Totoro) 1988 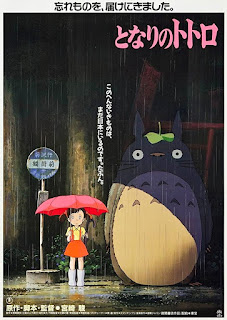 Premise: A father and his two young daughters relocate to a new house in rural Japan to be closer to the hospital where their mother is being treated for a long-term illness. The girls discover that the forest behind their new home is inhabited by spirits and soon find themselves being befriended by large creature named Totoro.

Delivery: From the very outset of My Neighbour Totoro, one thing is clear - this film is beautiful. Not just through the vibrancy of the animation and background scenery (or the incredibly catchy title song) but the stunning attention to detail in the characters. The first scenes of Satsuki and Mei exploring the grounds of their new home are so well observed that I was immediately caught up in their excitement. This great interaction between the two sisters becomes the core of the film and Miyazaki continually uses their relationship to connect us with our own childhood memories.

The storyline of the film is rather minimal, focusing on how the children adapt to their new situation. However, the manner in which it depicts these scenarios and the emotional themes that it employs are done so well that many will feel familiar. The final third of the film in particular captures so many key things about being a child, from the joys found in simple things, the anxieties of growing up, the fractious relationship between young siblings, to the way we look up to our parents. As this plays out I found myself reliving similar moments in my own childhood and all the emotions that come with them.

The films namesake, Totoro, is the purest childhood reference in the film, serving as both imaginary friend and guardian all in one. He communicates solely through roars and grunts, but does not require anything further to be endearing; his facial expressions alone often give us all that we need. To give you an idea of what I mean, it is somewhere between your childhood teddy bear, a puppy and Ralph from The Simpsons. One scene in particular, in which Totoro appears whilst the children are waiting at a bus stop in the rain, plays this to perfection; reminding us of the pleasures that were once derived from jumping in puddles.

Over the years there have been a myriad of films that have tried to recreate both the playfulness and childish sense of wonder that My Neighbour Totoro captures, but few do so in such a simplistic and identifiable manner. Pixar have perhaps come closest with characters like Dug the Dog in ‘Up’ or Bing Bong in ‘Inside Out’ but both required considerable set up and development; reducing their appeal across a variety of age groups. The simple and relatable crafting of Totoro is why he remains such a beloved character 30 years later, retaining popularity without the need for endless sequels and remakes that attempt to introduce their characters to a new generation (Land Before Time and The Lion King immediately spring to mind).

Whilst Spirited Away may be Miyazaki’s most celebrated film, My Neighbour Totoro is the one that I think about more than any other. The films portrayal of childhood naivety and those first moments in our lives when we begin to understand loss/change are so well crafted that I have yet to find anyone that it did not resonate with after a first watch. It’s a brilliant love letter to our collective childhoods.


Bedsit it? I’m pretty much demanding that you do, if only so that for a few brief minutes your long-forgotten inner child can see the light of day again. Seriously, this film will make you smile in ways that you haven’t in years. 9/10