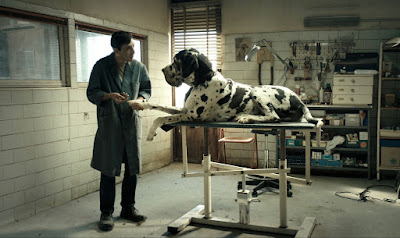 Dogman bounded into my life on the back of a wave of praise. The great reviews when it hit cinemas made me look forward to seeing it, and frankly all that stopped me was that I’m forgetful. I saw the DVD in the video shop and rented it immediately- or at least twenty minutes later when I’d settled on two more films.

Matteo Garrone has directed two films I am fond of: Gomorrah and Tale of Tales. Gomorrah, based on the brilliant Mafia expose written by Roberto Saviano, is not as great as either the book or the TV series, but is still very good. Tale of Tales is a beautiful, bizarre fairy tale made real. By which I mean violent and strange, which when you think about it is what fairy tales are.

Centring on a dog groomer in what appears to rather a run down suburb (of where I’m not sure, it may have been mentioned but if it was I missed it), Dogman’s protagonist is a an odd creature. I should clarify, he grooms dogs by washing them and improving their appearance, he's not pretending to be a King Charles Spaniel on doggy chat rooms with the hope of illicit meet ups.

Played, excellently, by Marcello Fonte who shares his first name with his character, Marcello is also a cocaine dealer on the side of pampering pooches. Unfortunately this timid, slight man has an acquaintance who is a locally reviled, monstrous coke addict. As locals become more angry, Marcello’s life is dragged down by this man, too.

Shot with a wonderful eye by cinematographer Nicolai Brüel, who finds beauty and scope in urban decay, Dogman is also admirably well acted. The story sold well by the cast. Sadly, the narrative only ever teeters on excellence early on, merely suggesting it, but it falls away as it drags its feet to an unfortunately predictable end.