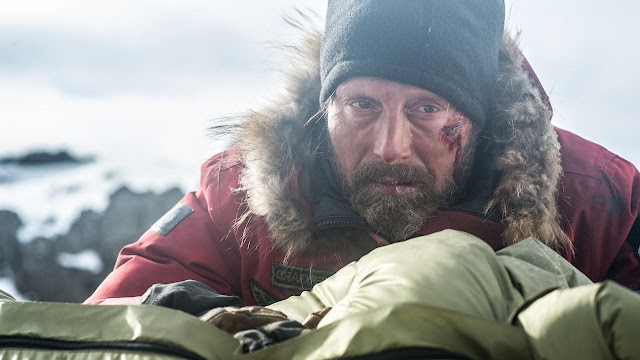 99p to rent on Amazon Prime, but also free on Netflix*

Arctic always looked interesting but was a film I’d just never got round to actually watching. Seeing someone talking about it on Film Twitter, I asked and he (Heff Sandurs) told me that I “won’t be disappointed”. Big shout Heff, I thought, and a few days later I settled down to watch it.

This is director Joe Penna’s first feature film, but before Arctic he was making films on YouTube and had over 3 million subscribers so in this modern world, he’s pretty schooled for a debutante. Penna has a Sci-Fi, Stowaway, due for release on Netflix later this month.

Mads Mikkelsen stars in Arctic, and his character’s name we only ever see/ hear in passing (but listed as Overgård on IMDb so that’s what we’ll call him). He has crashed his small plane and is surviving as best he can in the harsh environment. Overgård is all alone and lives a monotonous, silent routine; each day is like the other, his time dictated by quiet beeps from his watch. I found this idea of solitary confinement in a great expanse very interesting. As my old teacher used to say, you can hear silence- here it is deafening.

Mads is really the only speaking character in Arctic, and there’s not even really a lot of speech. If that’s making you recoil to “no not interested”, please bear with me. A picture tells a thousand words and film is shot at 24 frames per second mostly, each one of Arctic’s 138 minutes crammed with 1000 tales so that’s like, maths, man. 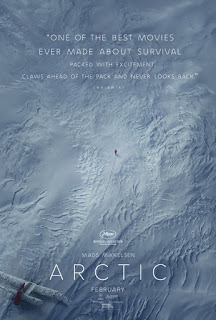 Arctic is immediately captivating and that Mikkelsen imbues a man who isn’t doing anything other than existing with so much character it is astonishing. I deeply cared and rooted for Overgård quickly.

Living on the edge of starvation, the ominous threat on the periphery of his existence of polar bears, stalking the snow unseen but terrifying, Overgård is faced with a difficult decision. He must either attempt to reach a more safe, and crucially obvious place of residence and rescue, or remain in his shell of a plane, where he has a set up but far less chance of survival. Events somewhat force his hand on the decision. This is not a spoiler, the premise “man decides to say nothing and stay exactly where he is” definitely wouldn’t sell a film.

Overgård’s journey is captivating and gripping, beautiful, bleak and honestly such an overwhelming Odyssey that I couldn’t even move, let alone take my eyes off it. I finished the film with my heart pounding and I’m not going to lie, at points Arctic had me welling up. An astonishing feat of filmmaking that builds to a roaring crescendo. Arctic got a ten minute standing ovation at its Cannes premiere and it isn’t hard to see why. It took me about that long to get my breath back.

An excruciatingly exciting, moving and jaw dropping film Arctic scores an emphatic 9/10. I cannot wait for Penna’s next film to drop later this month. Thanks Heff!

COLD PURSUIT
THE SNOWMAN
BLOW THE MAN DOWN