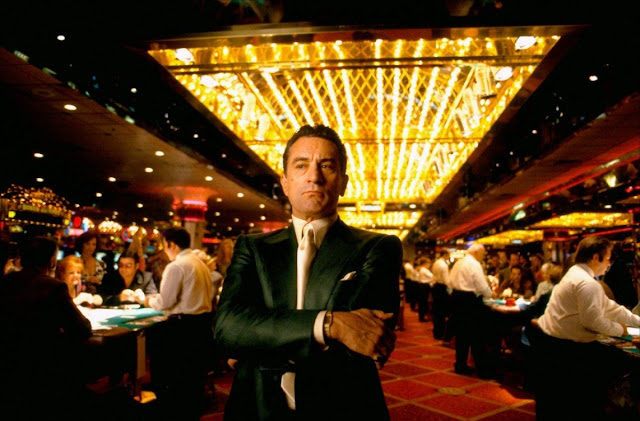 Have you ever had a night where you can’t decide what to watch? I was having one of those. Casino was the fourth film I put on the projector to watch having started and stopped after a few minutes three movies before it, because that’s how it works; three plus one is four. Honestly I wasn’t sure how far I’d get*.

Casino is now 25 years old and I’d love to claim the quarter century celebration was my motivation for this review but see the above paragraph- I was tired and it was there. If you are in London, the wonderful Prince Charles Cinema are screening Casino in 35mm in January to mark the anniversary, if you still want to see it after this review**.

A Martin Scorsese directed, Robert De Niro and Joe Pesci starring, Mafia involving, crime epic is always going to be compared to Goodfellas. For good reason; Goodfellas is a benchmark, brilliant gangster film. Casino does have its differences from that film though.

Set in Las Vegas, friends and dodgy as fuck colleagues Sam and Nicky grow apart, each chasing different dreams via completely conflicting methods. Sam is sly, he’s complicit and greedy and an ego, but he’s also mostly a man you root for. A bit like Ray Liotta’s Henry Hill in Goodfellas. For all intents and purposes he is the protagonist, but this is murky moral mud set in Sin City.

The narration from various characters is great, particularly Pesci’s gangster Nicky’s funny, fast and foul mouthed crookedness. De Niro’s casino executive Sam's more precise, measured voiceover competes, contrasts and completes the style choice. It really drags you into the film (much as it did in Goodfellas, yes) and the characters’ minds.

“In the casino, the cardinal rule is to keep them playing and to keep them coming back. The longer they play, the more they lose, and in the end, we get it all.”

As with any film of this nature, shit escalates and specifically when Sharon Stone’s hustler come hooker come love interest Ginger enters the fray. She’s a wonderful character who is every bit as amoral as the men. In fact, Ginger’s involvement is what takes Casino away from a straight up gangster film into a somewhat deeper drama examining relationships. The completely corrupt triumvirate are morally bankrupt but not fiscally so, and extravagance, decadence and demented devotion pollute an already toxic mix.

While I understand addiction, I really don’t understand addiction to gambling. Where’s the high? The house always wins and if ever a film drummed that home, Casino is it. When you base something on money alone, you’ve set out on the wrong foot. Almost every relationship in Casino is based on money. Greed alone is not a good foundation for the infallible but good God does it make for a fun watch as people set fire to all around them and fight each other to make it out of the fire exit first.

Finally, death by pen, it's an obscure homicidal approach but the 90’s mastered it with Casino and Grosse Pointe Blank.

While Casino suffers ever so slightly from an anticlimax, that is a very small criticism of the film. Hugely entertaining, fresh enough to stand alone from Goodfellas, which is a film it is often compared to by the way, and infinitely better than The Irishman which really disappointed me, if you’re looking for a great Scorsese crime film, Casino is equal to his best. Like Goodfellas. 9/10

*Full disclosure, I made it an hour and a half in because Casino is three hours long and after so many false starts it was late and work don’t accept “but I was watching a Scorsese film until 2am” as a valid excuse for lateness.