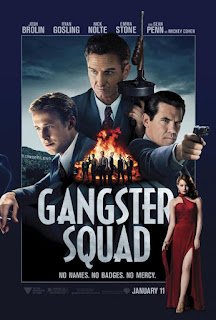 Tagline: “No Names. No Badges. No Mercy.” No nuance. Apt.

Execution: It's not bad, Gangster Squad, but it's not not that great either. I like a lot of the cast, and director Ruben Fleischer's 2009 film Zombieland was a hoot (even if it was just a comedy reboot of Carriers). This is not as funny as Zombieland, and doesn't stand up in the serious drama section really either; although the cast are amiable enough as bullets and wise cracks fly. It's also more predictable than an Anthony Joshua press conference, but with more violence.

While there's plenty of action, I take issue in that much of it is sanitised and a bit 90's, with people jumping when they got shot, or shaking like a southern preacher as lead tears through them. The humour and pace of the film are what keeps it going, and on first viewing I rather enjoyed it. But Gangster Squadnis so devoid of soul, and dumb as a bell to boot; repeat viewings have not done it any favours.

Bedsit it? If you want to switch off and see some shoot outs, yes. Don't expect it to be any more than that. 6/10
Labels: Action Bedsit Cinema Cinema Drama Film Movie Rated Review Thriller