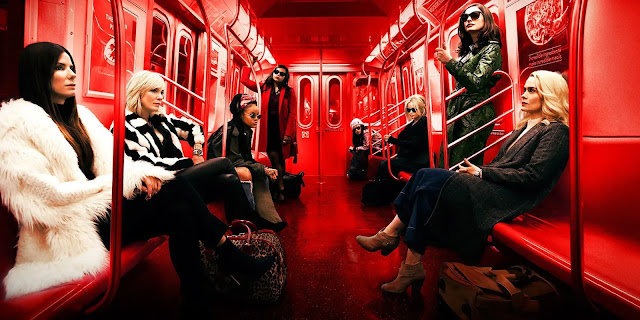 Action/ Comedy/ Crime
Rated 12
Rented from For Your Eyes Only, Forest Hill

Spoiler alert, I’m going to give you a clue as to what I thought of Ocean’s 8 right now. It is neither action or comedy, despite what IMDb tells you. There’s neither enough laughs or gasps for those categories.

Deceptively however, Ocean’s 8 has a pretty entertaining opening act, as the two leads (Sandra Bullock and Cate Blanchett) pick their team. It’s something unseen on screen since Ocean’s 11 in 2001. I know there was an Ocean’s 12 and Ocean’s 13 but I don’t remember the picking the team bit in them, if there even was one, and this is my review so it’s unseen since 2001. The plot is that some criminals plot a heist to steal some shit or other, with a kooky team plucked from da streets and that. Only they’re women. Which is why it’s a new idea, apparently.

I’ll get into cinematic chromosomes later.

Why does the Australian actor Cate Blanchett’s Aussie accent sound fake? Has she been impersonating Queen Elizabeth and conjuring up Galadriel so long she now floats in the same pronunciation purgatory as Littlefinger? While I am a huge fan of Cate and Sandra too (we’re all on first name terms) this is not chemistry central. Nothing about Ocean’s 8 feels new or frankly even very good. New. Different. Old. Tired.

It’s pretty on trend, but can’t we just have films and potential franchises with female leads, rather than remakes of old ones which starred men? Spy is getting a sequel and I’d watch a sequel of The Heat, too. Both are Paul Feig creations, can we just put Paul Feig in charge of it all? That’s unfair, there’s plenty of great filmmakers who could conjure up some XY-cinema. But I do love Feig’s films. In fact his Ghostbusters was an absolute blast and probably the best of the gender swap remakes I’ve seen.

Even the largely lauded, and original, Widows hinges on women being left to clean up after men, as if it is some sort of sequel to what their spouses did in the first film which they didn’t make. Also, I hated Widows.

At the bottom I've linked to some reviews of great female led films, so have a gander! 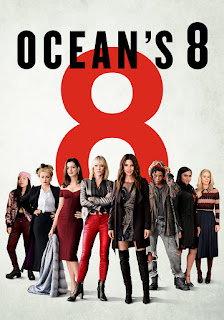 It’s rare you see a film that has more hours of cosmetic surgery on screen than VFX, but I reckon Ocean’s 8 has achieved that. The women, all beautiful, seem to have had their faces surgeried to replicant levels of creepiness. Now, call me sexist and say that Brad Pitt et al have all had work done too, and you’d be right they have, but I’m not attracted to men so I notice it more when it’s someone I innately found good looking anyway. Don’t do it girls, you’re great and we all age. Plus there’s VFX now, but I think if The Irishman taught us anything it’s that the software isn’t up to that yet.

As the heist plot ticks away, I was hoping the third act will save it from mediocrity; enter James Corden. In another portent of doom, he makes the film slightly better briefly. I quickly started to get bored, though, as Oceans 8 diligently ticked every box on the heist film cliché checklist. Ocean’s 8 is like every heist film ever. Are there heist films which don’t fit a format? I want to know.

It’s never a good sign when you’re wondering what film you’re going to watch next.