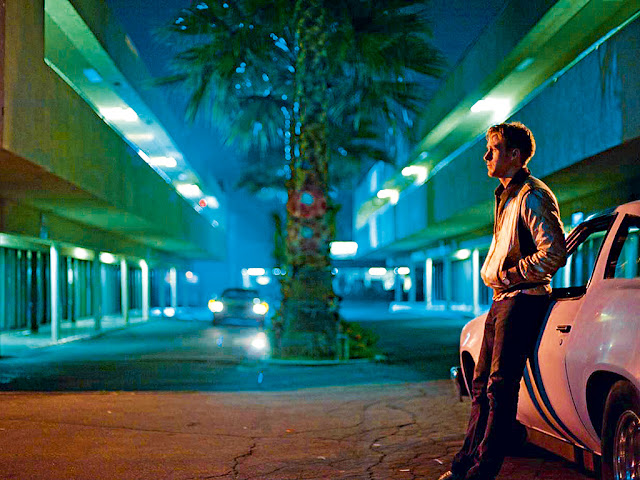 My Romeo + Juliet review is still a work in progress, so please accept this review of Drive instead. Now, with a name like Drive you’d expect the film to have plenty to do with cars but actually there’s two loves of mine at work here: violence and those blue, blue eyes.

Cars leave me flaccid but give me Ryan Gosling going postal and boy we have ourselves a movie! In fairness the driving isn’t unentertaining at all, just don’t talk to me about chassis.

Gosling’s character (known only as Driver), a stunt driver by day and getaway driver by night has not a single vice or flaw*, depending on whether you think being almost wordless a flaw, has to be a comment on something. Maybe it’s just a character tick to add criticism of the strong silent type myth; knowing director Nicolas Winding Refn though (Valhalla Rising, Bronson, The Neon Demon) there’s got to be more to it than that.

On Winding Refn, how is Winding pronounced? Is it winding as in winding road or wind-ing as in that terrible, nonsense, font?

One act of kindness lands Driver in about as much of an attachment with another human being as I think he is capable. Carey Mulligan’s Irene and her son are semi free of low level gangster, father and ex, Standard (Oscar Isaac). Once Standard meets Driver, things descend fast into chaos and danger. Beautiful chaos and danger. Aided by car worker and “friend” Shannon (Brian Cranston) Driver gets an up close and violent tour up the Mafia food chain. 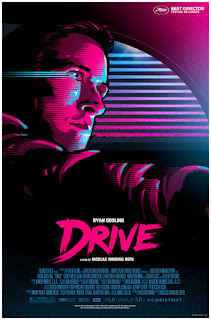 Driver is not a hero, he is not an antihero, he just is. This may be where the vice-less-ness is important, in driving home his almost untethered existence in this world.

Also Brian Cranston looks like Michael Fassbender after a few hard years down the mines and every good guy seems to have a long neck. Just observations.

Drive is so cool it should have way more status and acclaim than it does. Imagine Baby Driver if Baby Driver wasn’t a massively overrated turd dumbed down for mass appeal. How do you dumb down a turd? I don’t know but does Gillian McKeith have Twitter? I bet she’d know, she’s sifted through enough Tupperware boxes of sloppy, soupy, KFC and frozen supermarket food poos that… I think I’ve just answered my own question.

There’s a tremendous amount of nostalgia in Drive from its narrative, which is essentially rather straightforward, to the music. The music is simply brilliant and you’ll most likely have heard at least one song since the film because so much of it entered the mainstream post 2011.

Drive veers between pure adrenaline and a dreamlike state which effectively lulls you into a false sense of security. When the adrenaline and violence show up it really does punch into you. It reminded me of A History of Violence in that sense. A wonderful action thriller that is well acted, stylish and much more accessible than much of Winding Refn’s other work.

Don’t forget, even if the plot, music and violence aren’t your thing (though they should be) you can always go for a swim in Gosling’s eyes. Ah Ryan.

Drive's score has gone up every time I’ve watched it, to a now unbeatable 10/10.

*Apart from being a criminal.