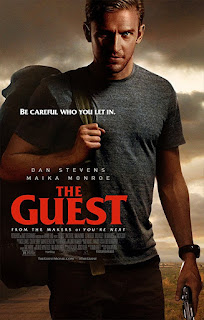 Tagline: “He's here to help.” Yes, help. Exuding the warm charm of a psychopath methodically dismembering your still moving kitten, The Guest is helping you solve that cat food shortage you told him about.

FFS the poster has a different one. “Be careful who you let in.” Well stroke my johnson and call me Monsignor, that's blown my mind.

Premise: A grieving family whose son died serving in the army are visited by his “friend” from the forces, who ends up staying with them. It doesn't go well.

Execution: I'm not always a fan of films trying to be retro, but done well it really can be something quite good. Drive, for example, was absolutely brilliant. But the retro thing always makes me think of the Frankie Boyle joke, “Peter Kay likes to do nostalgia, I can do nostalgia. Who remembers when Peter Kay was funny?” However The Guest, in much the same way as Driver, just feels 80's, rather than balls out setting itself in the 80's. Considering the plot is wafer thin, the retro vibe helps sell the silliness of it all.

Dan Stevens has the disarming blue eyes of Ryan Gosling, and he uses them to good effect playing “David”, who walks into the family home and life of the Peterson family, dazzling them with charm and just a hint of emotional bullying. Although look closer into those eyes, and what's underneath is a void of empathy. “David” has all the caring tenderness of a cat playing with an injured bird (loving the cat metaphors today apparently). People start dying, and teenage daughter Anna (Maika Monroe of It Follows) puts two and two together faster than any of the other characters.

From there The Guest shifts into something between The Terminator and Halloween as a cat and mouse game unfolds (nailed it), with Anna the prey. It is at once ridiculous, unbelievable and bloody good fun. Stevens is rather excellent in the role, the only other production I've seen him in is A Walk Among the Tombstones, which while a decent enough film, I don't remember his character at all. There's plenty of action, none of which takes itself seriously, and the time flies by rather enjoyably. Provided you get joy from watching people die gruesomely. Which I do. Oh God, I'm “David”, aren't I.


Bedsit it? Depends on your thirst for blood, but for a gore hound like me it was like a saucer of cream. I lapped it up (four). 7/10
Labels: Action Adam Winguard Bedsit Bedsit Cinema Cinema Dan Stevens Family Film Movie Rated Review Shooting The Guest Thriller