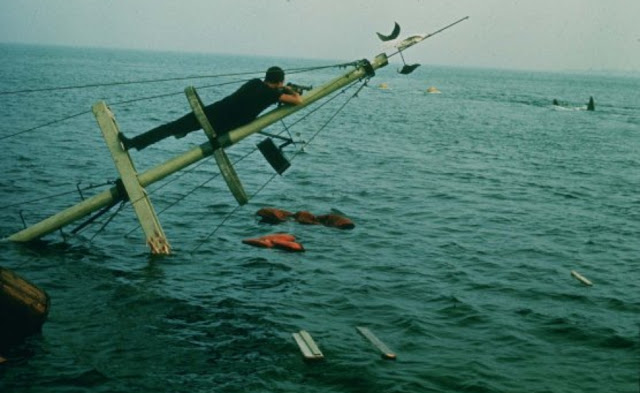 Bedsit Cinema is 200! Two hundred reviews. I couldn’t be bothered to work out exactly when, but like the Queen*, who cares when the birthday is really. This post is as close to two hundred as I can work out.

I was eight when I first saw Jaws, it terrified me and I loved every second. Its indelible effect is still life altering almost twenty years later. Oh fuck. Almost thirty years later. Bloody hell.

Jaws is probably the first film which seared itself forever into my grey matter. Less than ten years later another Spielberg film, Saving Private Ryan, would bring horror to my life in a whole new way- and I wrote about a similar revisiting of that film over at What the Flick. Swimming in the sea and getting eaten by a shark really stuck with me; even to this day it crosses my mind when I go in the water, no matter how irrational (it’s always irrational). Even Lewisham pool's deep end held fear for years.

I wanted to review a special film for reaching Bedsit Cinema’s 200th. I wanted to do it in a special way, too. No, silly, I’m still going to make bad jokes and write a review of a film you’ve seen before. I mean special for me. To which end I have selflessly invested in a £60, surprisingly good, projector and turned the Cinema into something much more cinematic and in doing so, my room into a bomb site.

The projector does reverse projection, but if you were thinking that you could set it to that then get the full IMAX experience by sitting really close and using your glasses as a screen… it’s not as good as it sounds.

Despite having seen Jaws countless times, watching it on a big screen with decent headphones making the sound better and a proper cinema feel was superb. I’d never experienced it like that and it really boosted Jaws’s effect again. The film is surprisingly shocking, even still. Kids films these days are not this grown up. Is Jaws a kids film? Anything under a 12 is a kids film by my rules. It was PG when I first saw it and I noticed they’ve bumped Jaws up to a 12 now, but I’m fairly sure it’s just because literally every character spends the entire film smoking.

It annoys me that real life is painted out of certain arts, but I did have to pause and go out for a fag. Who says kids are impressionable.

Although I joke at the start that everyone has seen Jaws, it is now so old that it dawned on me there’s a whole generation who won’t have. These impressionable young minds need to make the effort, how will they know to fear the ocean and destroy its natural inhabitants when they unreasonably do what they’re designed to do as we encroach on their environment? How I ask you!

Buy yourself a projector, destroy your room setting it up, and watch Jaws that way. It is an undeniable classic, a masterpiece, and one of my all time favourite films. I enjoyed the viewing so much I dug out my DVDs of the sequels and watched those all, too. Don't do that, though. Just watch the first one. 10/10

*Am I comparing this blog to the Queen? Is Bedsit Cinema film reviewing royalty? Hey, I'm just asking questions here.