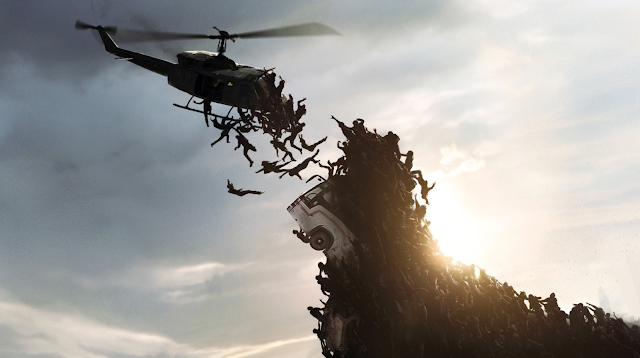 Page to Screen is a series taking a look at the journey of a piece of writing (be it novel, non fiction, play etc.) to its on screen, and other manifestations
You'll often hear people lament that a film or series didn't live up to the book, but it's an unfair comparison. There's too much imagery, motivation and detail even in a relatively short novel to keep it all in a motion picture. Plus, why would you want to? They have very different experiences and purposes.

Max Brooks' World War Z was released in 2006; a sprawling zombie novel with an innovative, original style, it was a breakout best seller for the genre. Selling over a million copies worldwide, it was picked up by Brad Pitt's Plan B Entertainment and became a 2013 film, starring Pitt. The transition from page to screen was not a straightforward one for such an intricate and broad story with no real main protagonist. 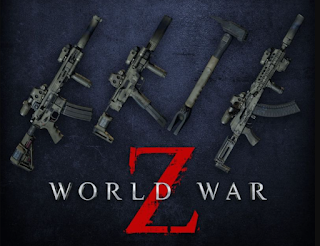 The obsession behind its creation birthed World War Z, essentially zombie-literature's Huckleberry Finn. A meandering yet pacey story, World War Z's central character is an unnamed reporter with little personality. A conduit. Stated as being ten years after the start of humankind's fightback, World War Z is never clear in quite how stable the world remains, though it is obviously a lot safer than the events on its pages recall. Brooks' story critiques an infighting and self concerned globe, almost decimated by the pandemic. Huh, pandemics, the bothersome bastards.

Told in short, conversational prose, the focus is on an interviewer talking to many people. All unique apparitions, surviving spectres, speaking through this one person and uniting a globe of voices who oft disagree. World War Z covers the aftermath, the despair, the desolation. It is unsurprising to hear Brooks was inspired by 1985 Pulitzer prize winner "The Good War": An Oral History of World War II by Studs Terkel.

World War Z: An Oral History of the Zombie War, is the novel's full title.

Immediately noticeable, for fans of the genre, is Brooks' willingness to use the Z word. It is, or was before his book, most unusual for fiction writers to use “zombie”. Perhaps this is for fear of taking the reader out of the environment constructed so painstakingly for them by associating their story with all other zombie fiction and films.

What Max Brooks did was play to that knowledge, setting World War Z on an earth fully aware of what zombies are (in theory). That the characters then acknowledge it, and go on to argue about whether zombie is the right word, is a master stroke.

World War Z really excels, though, in the level of intricacy and detail of its global viewpoint. Our scribe presents experiences, stories, anecdotes of everything from the economic fallout, to the political, personal and war-like experiences the dwindling human race

suffered under undead oppression. Literally visiting the extreme ends of the world, Brooks' writer presents a gamut of opinion on the world's predicament.

The skill involved in believably conveying so many distinct characters' words, with differing ages, cultures, opinions and experiences is astonishing. Superlative, even, no matter the genre the writing appears in. Research must have taken an age to hammer these characters into individual, bespoke hooves with which to travel the story. Brooks is a man with many voices, creating a narrative arch from a patchwork quilt.

World War Z might not sound like it is for everyone, and it isn't. However, Max Brooks has created a novel, a story, and a world of sufficient genius to grab many more readers yet still. This is not good writing of a bad book; World War Z: An Oral History of the Zombie War is a well written, serious story, containing layered obvious global subtext, which uses zombies to entertain and intravenously infect our awareness.

It is clear Brooks knows his work's power lies in sincerity, in being defiantly believable in the face of the absurd. World War Z was always going to be a hard piece of writing to bring to the screen. 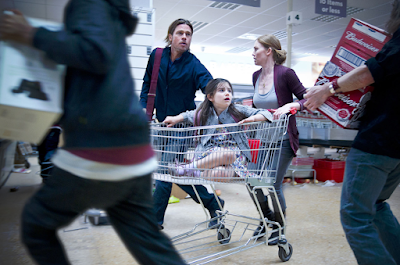 World War Z, the impossible film. A many armed beast, writhing with intricacy and detail but full of vastly different characters and timelines which don't overlap; how did the story, the essence of Brooks' book, survive on screen? This is debatable, though there is more of the book in the film than just the one character, an Israeli spy, as Brooks claims.

The kind of creativity and lateral thought needed to turn a very difficult novel to film into a successful cinematic experience is a soul destroying rarity for the mere mortal. World War Z was acquired after a bidding war by Plan B Entertainment in 2007. The company does have a good record of backing excellent cinema; The Departed, The Assassination of Jesse James by the Coward Robert Ford and Kick Ass were all made by Plan B prior to World War Z.

While directors came and went, the final choice of Marc Forster (Quantum of Solace, Monster's Ball) was promising enough. Employing a number of screen writers over a protracted period, was less so. Well publicised re-shoots, replacing an entire, expensive final conflict, were very much not a good omen. In short, World War Z's journey to the screen was a problematic one.

Much like other literature with a small but fervent fan base, the interest amongst the novel's admirers was vocal and opinionated. However, even if every one of the million copies sold of World War Z brought their friends and family to see the cinema release, it was going to have to attract more than just the hardcore. In short, the film needed to appeal to a wider audience. Author Brooks, was less than optimistic,

"I cannot guarantee that the movie will be the book that they love. And I'm in no position to tell people to see this movie or not see it. If I'm asked I say: See the movie as a movie and judge it as a movie."

The final plot concerns Pitt's character Gerry Lane, a United Nations investigator cooked up to be the film's needle, weaving his way though the patchwork fabric of the original text's story. Where possible, that is. World War Z boasts the usual big budget zombie tropes: outbreak, onslaught and fightback. Almost $200m production costs also mean it was not made on a shoestring.

While the film does not in any way reflect where the novel was so strong, that myriad of tales would have been hard to replicate faithfully. Particularly in a summer blockbuster which needed to recoup such large sums, then add profit. Unfortunately for the die hard World War Z fans, they were going to have to accept that. The first bone of contention was the zombies; always a divisive issue. Forster's film has the undead move more like 28 Days Later's infected, rather than Brooks' more classic zombie.

The apparently straightforward plot, essentially Brad Pitt travelling the globe attempting save humanity whilst getting into small and large scale scrapes with the undead, was also contentious. Though this is where the film stays closer to the book than immediately obvious.

It would be almost impossible to jump around the globe without motive other than to report on events gone by, bordering on nonsensical. World War Z's screen writers knew that there needed to be urgency- i.e. the film's timeline running concurrently with the war.

Gerry Lane essentially becomes Brooks' unnamed reporter, and his job as an investigator makes him central to the battle. The need for him to solve this global crisis involves him travelling the world, visiting many of the locations mentioned in the novel. What the film also has, is lots of small information included, little nods hinting cleverly and subtly at the grander scale which are directly from the text.

World War Z isn't the same as it's titular book, no, but it couldn't be for many of the reasons a lot of literature cannot simply be transplanted to cinema. On screen it is to be seen as a movie, separate from but related to the novel. Plan B Entertainment came out of the ordeal fairly well, their film made half a billion dollars and a sequel directed by David Fincher is in production.

Perhaps best, and most surprisingly, even Max Brooks liked it,