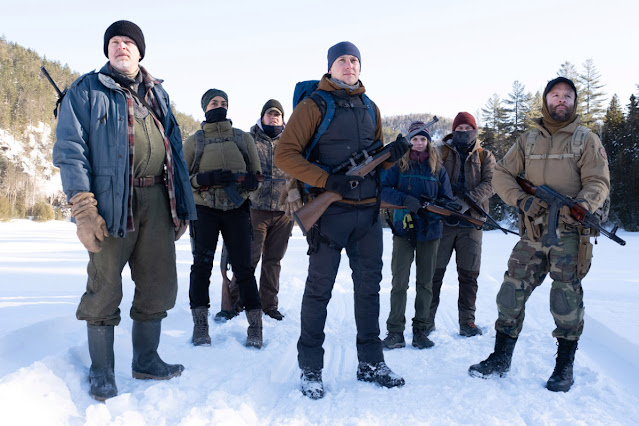 One of the reasons I love Film Twitter is 99% of the time it’s friendly and about sharing a love of films; not, say, arguing with everyone who has different boxing or political opinions. The Decline was not a film I knew anything about but Gareth W Morgan tweeted about watching it, I asked if it was any good and he said yes, highly recommended. I read Netflix’s brief description and married with Gareth’s opinion was sold immediately.

Doomsday Preppers I find absolutely fascinating. People whose whole life is consumed by the idea that they have to be ready for the world to end imminently and be able to escape to safety, or in some cases already exist there (which seems more sensible), is both bonkers and in a way understandable. Who doesn’t fantasise about getting a big gun and going into the office and blowing everyone away then going on the run? That’s a different thing, you say? In which case, definitely not me! You monster.

The Decline is set at a retreat, where a group of Preppers, all strangers, are to learn the vital skills to survive whatever the hell it is they’re terrified will happen to the world. This event is always unique to the person and oddly unmoving; from watching the TV show Doomsday Preppers few of them will acknowledge that anything other than their unique paranoid fear is a possibility.

It's something of a paradox, Prepping. "This awful world event is going to happen, I can't wait."

You’d think a global pandemic would be a Prepper’s bread and butter, but apparently a lot of them are on the “Covid is fake” bandwagon. Weird. Anyway, on this remote “secret” part of the Canadian wilderness, the guests meet their host and Doomsday-Guru, Alain, who lives in the off-grid Oasis. 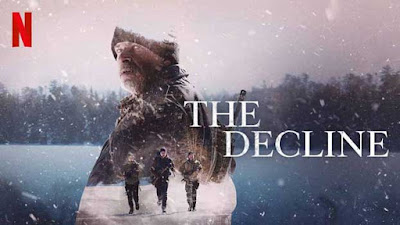 The characters all seem fairly reasonable, despite their odd hobby, and I warmed to most of them pretty quickly; but as with any film of this sort you know when shit inevitably hits the fan their true colours will be shown. The Decline is well acted and the performances are all natural, nothing showy. After a gentle start, shit does hit the fan, and the film bursts into life.

The Decline reminded me a lot of Blue Ruin. A low budget but exceptionally well made film with plausible acting but most importantly, believably nasty, toe curling and exciting action. Director Patrice Laliberté is one I’ll definitely keep an eye on. As the survivalists inevitably begin popping, like flies hitting a windscreen, the story twists and turns toward its inexorable final showdown. At a concise one hour and twenty three minute running time, The Decline is perfect, punchy Preppers savagery.

IMDb can suck one here. The score for The Decline is 5.9 at the time of writing but if you look at some of the low score reviews, all this proves to me is people are idiots.

Perhaps mainly because it caught me at exactly the right time, in exactly the right mood (wanting violence), The Decline gets a higher mark than perhaps a second viewing will reward. Perhaps. Who cares about the future viewing, I loved this one. 9/10