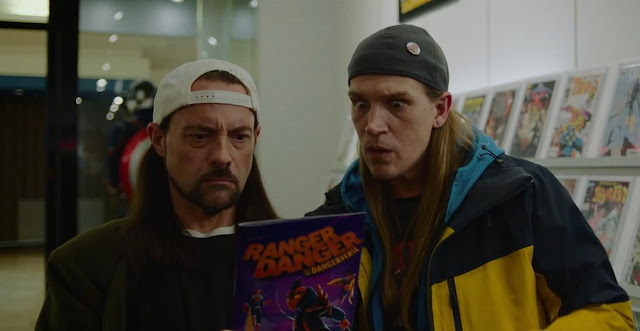 Jay and Silent Bob’s appearance in the very funny Dogma made me like the characters. I was fifteen when I saw it. Then in 2001 I really enjoyed their solo movie effort, Jay and Silent Bob Strike Back. In 2001 I was smoking a lot of weed. In 2020 have have upgraded to Tesco’s own brand white wine (I’m older, not rich) and realised quite quickly that Jay and Silent Bob Reboot was no longer going to be something I could engage with, no matter how fast I glugged Pinot Grigio.

How much you are on board with with Jay and Silent Bob’s brand of knowing crudity, as in vulgar jokes not carrot sticks and hummus, will dick-tate much of your enjoyment of this film. Now, it’s no secret that I love a blew joke, and a pink one, but I’m thirty six and write a blog that I edit myself. Kevin Smith is fifty and had to get his script past studio executives. 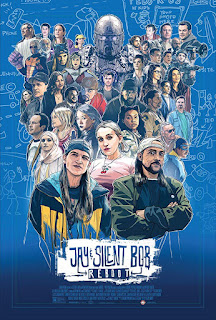 The film is self referential to the point of distraction. As in, it is distracting for the viewer and also from the flow of the film. I know Jay and Silent Bob Reboot is a return for two “loved” characters and Kevin Smith is popular in Hollywood, but wind it in a bit mate. If you hadn’t met the characters before you’d need a dictionary of their parlance to participate. It’s like trying to study Kant’s Critique of Pure Reason, while stoned drunk.

Oh man, I just compared Kevin Smith to Immannuel Kant didn’t I. Sorry Hannah. Although Kant is properly pronounced Cunt so that immediately makes him funnier than Kevin Smith, until you have to decipher his impenetrable 18th Century German metaphysics.

Already finding it hard to get past all the self involvement (another thing I am in no way guilty of on Bedsit Cinema), when the litany of guest stars pop up in admittedly occasionally amusing cameos, I struggled even further. The plot of Jay and Silent Bob Reboot is essentially irrelevant as they bumble through Hollywood stoned meeting Kevin Smith's pals. It’s a lot like Jay and Silent Bob Strike Back, yes, but less funny. Or maybe I’m just less high.

Jay and Silent Bob Reboot is trying in both senses of the word.

I did make the end of the film, but Jay and Silent Bob Reboot is a geek-out love-in for fanboys- a group of which I am no longer a member. Ageing stoners. It isn’t accessible if you don’t know the characters already and as I’ve just explained even if you do it isn’t very funny. I kind of want to rewatch Dogma but I’m scared it’ll ruin my memories of it. I think I’ll go back to studying Kant, I always hated him anyway. 4/10