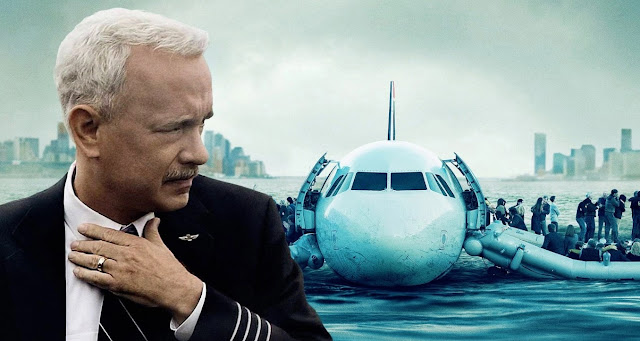 I’m prejudiced against true stories because I’m omniscient and therefore everything that has happened, ever, is old hat and boring to me. Like New Testament God when he got tired of handing down plagues and punishment and just let us do what we want with jaded half threats of consequences in the afterlife. I know what’s going on, you’re all dull, maybe invent purgatory for yourselves as a holding room of hope. To clarify, I am better than God because I exist but worse than God for the same reason. God versus would sell more pay per view buys than me. Doing what, you ask? God stuff innit. Making cheap wine and that.

Films of real life events are often a letdown, not always, but I’m forever suspicious and that’s why it took me ages to watch Sully even though I love Clint Eastwood and Tom Hanks.

Do you know the story of Captain Sully? Well, he captained a plane what went all wonky and instead of parking it headfirst into a building like is fashionable in New York, he gently ploughed into the Hudson River at 300 miles an hour and only a duck got concussed. You might think that knowing that means the story is ruined, and you’d basically be right because Sully goes exactly the way I expected it to, throwing up very few surprises.

It’s irrelevant because at very few points was I engaged properly with Sully, but Michael Rappaport is in Sully. He’s a prerequisite for New York, ol’ Raps, like the Statue of Liberty. Even if you’re not actually filming him in the city he’ll be in the background somewhere, getting royalties. A digression, but a necessary one. Brace for impact, more moaning coming at you like ducks fleeing a flight path…

What’s so bloody stupid  is that there is literally no way of seeing the film without knowing what happens. It’s on the posters, in the trailer and yes, in this review. Oh and it was all over the news everywhere in the world so in case you lived under a rock or are three years old you more than likely know the story. Passengers saved, Captain Chesley Sullenberger (that’s a horrendous one-two of a name, the poor fucker) is a hero. I struggle to see the point in making the film, especially after Robert Zemeckis made Flight, starring Denzel Washington.

How shit was The Sixth Sense if you knew the ending before you saw it for the first time? Pretty shit right. Clint Eastwood and team hard sell the drama of the events and try to imbue Sully with a faith in humanity which is admirable and simultaneously the least they could do. They could have taken a different perspective on the story and it might have been a better film but the title gives away who it’s going to focus on, and with Tom Hanks playing him it was unlikely he’d turn out to be a lizard who drinks the blood of infants*.

In order to bring my unchecked ego crashing back to earth like a well repeated metaphor, ducks and whathaveyou, there are great films about real life happenings (not The Happening) which are good. Clint Eastwood even has more recent form; Richard Jewell is a vastly superior film to Sully.

Maybe it’s just having a priori knowledge of the story. Not maybe, it categorically is that. Knowing the story of Sully then watching Sully confirmed every complaint I have about cinema based on a singular, well known event. The film plods along to the conclusion you knew 90 minutes ago before you put it on. 5/10
*Although M. Night Shyamalan- idea for you.