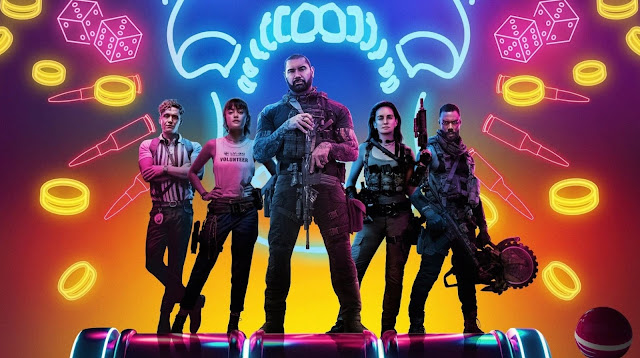 I first saw Army of the Dead when it came out on Netflix, months before its counterpart and odd sibling Army of Thieves was released, and both are still available on the platform. A year after that I watched Thieves, and then rewatched Dead the very next day.
Army of Thieves (2021)
Crime/ Thriller/ Action
Rated 15
Netflix
Spoiler Free

Total Film magazine used to have a predicted “interest curve graph” for films - a humorous visual depiction of how the story ebbs and flows. Army of Thieves would be a great example of it because Christ did my attention wander during the film, in case Total Film Magazine are reading this. While I'm on film magazines, I usually bought Empire, but print media is dead; and I have lovely Twitter people now for their unending opinions.

Matthias Schweighöfer both leads and directs Army of Thieves, and he plays the role wonderfully. Engaging, eccentric, funny and clearly able to carry a film. As a director this is (in flourishes) visually exciting entertainment. Which is at least in keeping with Army of the Dead to an extent, although they are of differing styles. You may have spotted my caveats, you clever sausage, and they’re needed because Army of Thieves needs rather a lot of compromise as a viewer. 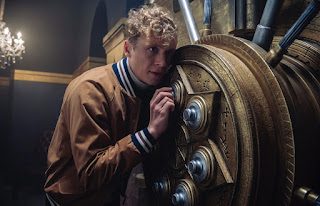 A nice opening introduces loner Ludvig (Schweighöfer) to the world of safecracking he’s always yearned for via ignored internet posts. I immediately liked the character, so feel free to draw similarities here if you want. He is oddly charismatic yet awkward, and meets a team of sticky fingered but clever tea leaves. These are dull and generic supporting characters who never entertain more than he does; I’d list them but there’s a romance and that’s really all you need to know.

While it starts well, Thieves then dips hugely. It perks up a bit when it becomes less procedural and adds some action, but it is still too wayward and uneven. Hence the aforementioned interest chart. This isn’t concise filmmaking; amusing in places, fun at times, but nothing more. I don’t really understand why it tied itself to Army of the Dead- are zombie fans really going to be dead set on a euro-heist film?

I would say Army of Thieves and Army of the Dead are so different it’s unfair to compare them… but the filmmakers knew what they were doing, one hopes. As a feeder to Army of the Dead, Thieves is unrelated bar a short scene at the end. As a film it is average, though stylish and amusing in flashes. Given the strength of its lead, Thieves could have been so much more. 5/10

There’s as much of a bridge here as there is between the films. They both have Army at the front of their title.

I have a love/hate relationship with Las Vegas. A city (does it have a Cathedral?) without shame, set on some of earth’s least forgiving soil, in "God’s land".

God loves a tryer and gamblers need all the hope they can scavenge. Army of the Dead is Las Vegas: extravagant, ridiculous, neon, fake. Zombies are the misanthrope’s monster of choice and in Vegas my barometer of hatred for humanity threatened to pop. Eventually I succumbed to the relentless heat and sleaze, enjoying as I do both hot weather and alcohol (which also greases the gambling). In a way everyone will, through one avenue or another, succumb to Las Vegas. Even if it’s in a Nic Cage - Leaving Las Vegas way.

Released before Thieves, Army of the Dead is Zack Snyder's second zombie effort, after his frankly underrated Dawn of the Dead remake. That film followed the Danny Boyle, genre altering 28 Days Later. Snyder’s Uber-Munchers are smarter, faster and stronger than your average screen shuffler. That irks some people but this is the supernatural, it's all fake, have fun. Like religion, go ape with it. Provided you believe in evolution.

Thieves and Army of the Dead are both heist capers, but the films are so different that even knowing the joins between them I just do not get why they are a twosome. In Dead, a rogue outfit of survivors (including Dave Bautista, Matthias Schweighöfer,and the ever awesome Garrett Dillahunt) are living outside the contained dead zone of post-outbreak Las Vegas, and are tasked my a murky millionaire to liberate a fuck load of cash money from a safe inside a casino. Like there’s no other money to steal in the world, not surrounded by thousands of hungry, nimble corpses.

Made with a sense of humour, much like Romero’s later Dead collection, Army of the Dead’s opening credits are joyfully silly and gory. Snyder employs an extremely stylised focal quirk with Army which takes some adjusting to, but he’s not really doing anything Romero wouldn’t have done in Diary of the Dead or Survival of the Dead - if he’d had the budget. The legendary filmmaker had a decent budget in Land of the Dead, made before those, and that’s probably why the funding dried up.

What a wonderful pioneer of horror though, George A. Romero. I had a plant called Bub. It died because I forgot to feed it.

The substance to Army of the Dead’s story is no more ridiculous than Train to Busan Presents: Peninsula, though it’s no less, either. Some great action scenes and growth in scale, right until the end when it all seems to shrink a bit? Some might criticise this as uneven, but I understand it - most of the characters are dead by then after all*. None of it is subtle, but if you’re watching this film for subtlety then you’re a tool.

The music is great, as it was in Snyder's Dawn of the Dead. Schweighöfer’s Ludvig is a welcome comedic crutch who even when dialed down from Thieves, still fizzes with charisma. You could take issue with the expansion of zombie lore with hibernation/smart Z’s and whatnot, but I love zombies and horror for exactly this reason; being that blood-soaked sandpit to play in from a storytelling perspective. So congrats from the Bedsit.

I stick by the 8/10 I gave Army of the Dead on first viewing, and because I was braced for it the random shallow depth focus didn’t annoy me this time. It’ll never be a classic, but if you like this kind of thing (crass zombie carnage) Army of the Dead is a very good film with plenty of fun ideas.
*that does not count as a spoiler, for fuck’s sake.