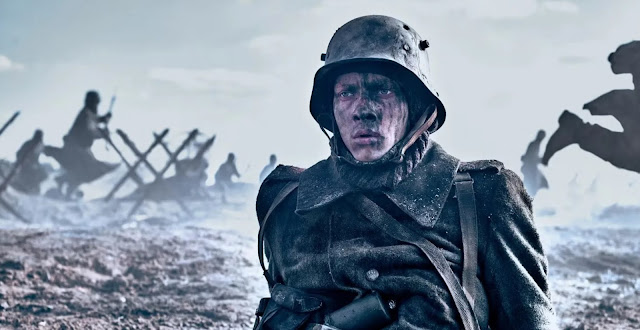 German World War One veteran Erich Maria Remarque’s novel All Quiet in the Western Front has been sitting unread on my shelf for some years now. One of my shamefully pristine books. I recently decided against reading it because I saw a trailer for this film, and much like I’ve avoided the Game of Thrones books because I want to know nothing of the story outside what is on screen, I left the paper original where it is.

All Quiet on the Western Front is now on Netflix, though did have a short cinema run.

Beginning, like much WW1 fare, with naive young men excitedly signing up for the adventure of war, All Quiet on the Western Front’s booming, oppressive audial overlay screams doom right from the start. A warning for the viewer, but then we know what’s coming to an extent. The characters do not, and Germany’s “greatest generation”, here represented by Felix Kammerer’s Paul and his boyish chums, head off to the front lines to have their patriotism and lives brutally ended or forever changed.

The film looks fantastic: gritty, muddy, bloody and exactly how one pictures the trenches (even if that wasn’t how they were all of the time). What All Quiet on the Western Front does so well is capture that and expand on it, give it a grand scale which other films haven’t managed to for whatever reason. Sam Mendes’ 1917 is an obvious comparison- a stylish, technological achievement set in the same war. 1917 is superb but All Quiet Director Edward Berger has made a very, very different beast to the English film, which was ultimately a romp. Despite their different auras, the cinematography, lighting and imagery matches 1917 and adds a realism unseen in not just a WW1 film but any war film I’ve seen for a long, long time. 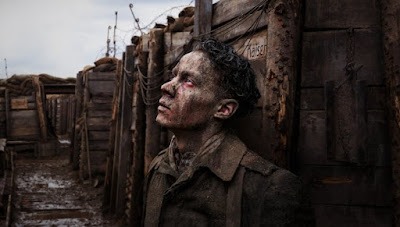 One central conflict breathes fire and smoke, rains steel and shells. My eyes saw but my heart stopped for a while as the battle raged, consuming combatants and characters I’d grown to care for. Away from the slaughter is no less dramatic, All Quiet on the Western Front manages to make its quiet, cold forests bristle with horror, its bleak no man’s land squirms dangerously under flares and men of every nation meet their maker.

Make no mistake, All Quiet on the Western Front is harrowing, and it transcends that because of how astonishingly well made it is. The acting is excellent and taking it all in is one hell of an experience. All of this derives from what must be an excellent source material, but I wouldn’t know because I haven’t read it.

All Quiet on the Western Front made me want to cry, at some points specifically but more just from the sheer hopelessness of it all. Thunderous cinema, which I won’t call anti-war because I think that’s a lazy observation. If a film makes me feel, I enjoy it.  About as close to a 10/10 as I can give on a first watch and yes I will be watching again.

While sad and sobering, war movies are awesome. Check these reviews out...
JOURNEY'S END
PAGE TO SCREEN: APOCALYPSE NOW
THE BOMBARDMENT
LAND OF MINE
BRUNO GANZ'S HITLER AND THE PROBLEM OF EVIL
ONLY THE DEAD
Labels: Action Adam Thorn All Quiet on the Western Front Drama Edward Berger Felix Kammerer German Harrowing Netflix Rememberance War World War One WW1