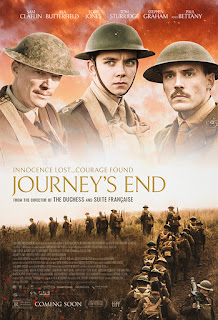 Premise: World War One drama set in the trenches in Aisne, France, in March 1918. A group of officers struggle to deal with the stresses on them and their men ahead of an imminent German attack.

Delivery: “It's bound to hurt a bit.”

As it is Remembrance Weekend, marking 100 years since the end of the First World War, I wanted to cover Journey's End, the recent British film, set in the trenches of World War One. Despite being now out of living memory, the war is nonetheless one which still “hurts a bit”, as the above quote from the film understates. So many people were affected by it and many today can list, with a sad pride, their relatives who died fighting. Myself included. Unlike fighting the Nazis, where there is perceived to be a good versus evil narrative, the sheer futility of the industrial scale slaughter of Europe's young retains a powerful emotional grip.

The reason there are no famous action films about WW1 is simple; its echo is one still of horror and pointless loss. Not one of glorious sacrifice and ultimate triumph, like its godforsaken spawn WW2. Journey's End is an excellent microcosm of a war which as the film states, claimed 700,000 lives on all sides in just three months after it is set*. The film portrays the war in a way which doesn't rely on brutality and a grandiose scale, boiling down the main issues into the events in one trench rather brilliantly- testament to the quality of R. C. Sherriff's play from which it is derived.

I was worried that the 12A certificate would make Journey's End a sanitised or child like film, like War Horse, but in fact it is very grown up, just not explicit in a blood and guts way. The detail is in the dialogue, conveying the awful stench of death without needing to show it- talk of the French using bodies of fallen men to reinforce the sides of the trench rather than bury them. That's enough in itself. Despite its strength lying in the words of the play, Director Saul Dibb (Suite Francaise) and team bring a nuanced realism to the visuals, rather brilliantly building the world outside of the dugout.

The budget doesn't appear to be lacking, partially because the film focuses on the intricacies of the situations in the trenches and officer's mess, but what there is is used well. Journey's End is driven, though, by the quality of the performances, as you'd expect with brilliant British talents such as Paul Bettany, Sam Claflin, Asa Butterfield, Toby Jones, Stephen Graham and Robert Glenister. There was a film called The Trench, made in 1999 with Daniel Craig and Paul Nichols, which I had hoped back then, would capture WW1. It did not. Journey's End delivered what I'd hoped for in that. It is a realistic, eloquent, damning portrait of the futile war.

Bedsit it? Ultimately a very powerful, fitting tribute to both the bravery of the men, who experienced sheer hell, and the supreme wastefulness of WW1. Journey's End's 12A status allows, earns even, a larger audience. Any ten, eleven or twelve year old watching this would get a real insight into the horrors of the war, without being so traumatised that they'd need therapy. I'd have really engaged with it at that age. For whatever that's worth. 8/10

*Total military and civilian dead and wounded is estimated at 40 million.


Journey's End is out now on DVD and Blu Ray 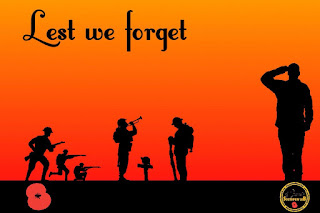