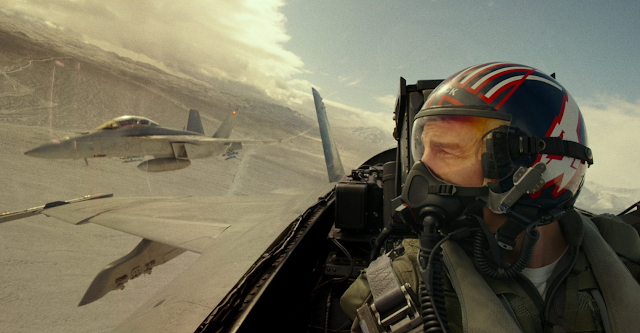 Trying to remember what happened in Top Gun, I couldn’t. Not a clear memory at all. There was one scene I thought I recalled pretty clearly, but on further mental examination I determined it’s probably from Days of Thunder.

Which is to say that while I have seen Top Gun, it was a long time ago and I had no emotional investment in Top Gun: Maverick whatsoever. What enticed me to the cinema was a good, old fashioned, exhilarating trailer. This, coupled with positive comments on Twitter from sensible people and a week off work, led me to the bright lights of Croydon; on whose golden streets we drove to what I have to say is an impressively revamped and comfortable, Vue.

I don’t buy into nostalgia, it does little for me. The Eighties? Pfft, I was a kid. The Nineties? Forget about it, I was still a kid. The Noughties were alright, Arsenal had a good team and I had no real responsibility in life and leeway to piss it up the wall as recklessly as I wanted. Do I wish I was back there? No. I do want to be young again, but only so I can piss my life up the wall in the now. What I can always go back to is a great film, but as I’ve said, Top Gun doesn’t hold that place in my heart.

I’m on record as liking Tom Cruise, and it isn’t just because he’s short like me. Cruise’s Captain Pete “Maverick” Mitchell, is still flying planes, still living fast and loose and is strong armed into training the Navy’s current crop of Top Guns on a dangerous McGuffin mission. These pilots are every bit as annoyingly good looking and confident as a Hollywood film would portray, and one of them just happens to be the son of Maverick’s old co-pilot, Goose.

Unnamed baddies have a nuclear facility that’s about to be operational and needs blowing up. Unnamed baddies have a shit ton of missiles and “fifth generation” planes (which I assume doesn’t mean 5G? Covid planes! Arrgh!) which are obviously terrifying because the Navy knows nothing about them, cleverly side-stepping any need for further detail. Finally, this bunker only has one vulnerable point, three meters wide, in topography suicidal to even attempt to fly at.

Nobody mention the Death Star.

Flying films are fantastic fun when done well, and here it comes: Top Gun: Maverick is done exceptionally well. Two hours and ten minutes of wow. Joseph Kosinski’s film makes dogfights and g-force and six-hundred mile an hour flying look astonishing and also, somehow, does it relatively simply. Or at least appears to do it relatively simply- I have no doubt an obscene amount of money and effort went into making it. The in-cockpit camera angles are a thing of genius; I was pressed into my seat as the minutes whizzed by.

Top Gun: Maverick doesn’t need a clever plot, or twists, or over the top set pieces, because the sheer adrenaline of its gripping action drag you from start to finish. None of the actors are there to win an Oscar, they’re there to have fun throwing up at altitude on camera for money.

If you like the sound of Top Gun: Maverick, and don’t enjoy the film, there’s something wrong with you. It is a Blockbuster in the truly old-school sense. It’s cool, there’s enough story that you’re switched on but not so much (coughENDGAMEcough) that you stop caring and mostly, it absolutely takes your breath away. 9/10