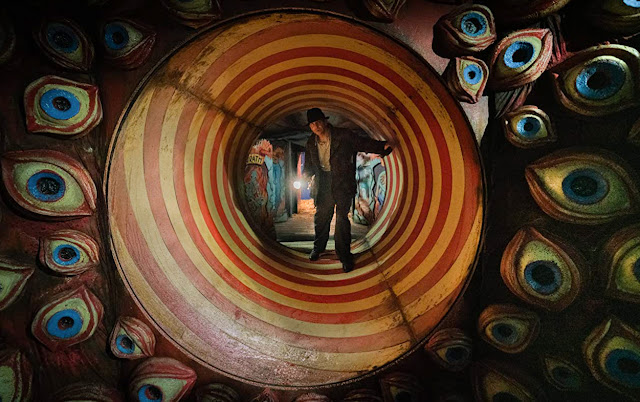 To say Nightmare Alley has an all star cast would be misdirection and yet apt, given it is a film all about slight of hand, both in style and substance. This is a cast with quality A listers (Bradley Copper, Cate Blanchett, Rooney Mara) and a laundry list of del Toro stalwarts and some of the finest character actors around (Ron Perlman, Willem Dafoe, Toni Collete, Richard Jenkins, David Strathairn, Clifton Collins Jr.).

If you don’t know Guillermo del Toro, then something is missing in your life. If you don’t love Guillermo del Toro, something is missing in you. Whenever the great Mexican has a film on the way (sometimes even often if he’s “only” a writer or producer) I get all in a flutter with excitement. Nightmare Alley is a bit of an enigma, the trailers portray an odd thriller with fantastical elements and it is that but it is so much more.

Word of advice, do not see the full trailer for Nightmare Alley. Much like most other Hollywood full trailers, it has far too much in it. Go in with a bit of mystery and trust me you will be rewarded.

Nightmare Alley looks out of this world. You expect intricate, layered design and sets from Guillermo del Toro, but wow the film is utterly jaw dropping. A lot of research clearly went into the creation of the carnival and its aesthetic is wonderfully in contrast to the second half of the film- more on that later. I was in love after about ten minutes.

Cooper’s Stanton Carlisle is a depression era drifter who stumbles across life as part of a carnival. It is a weird and wonderful world populated by the odds and sods of society, to paraphrase a character, “we don’t care where you’re from, we don’t ask what you done”. Here he meets this smorgasbord of the strange, splendid and sinister and slowly becomes a bigger part of their world. But Carlisle is ambitious…

What evolves is a film of two halves, which is at once a boa-constrictor tight noir, morality tale and didactic debate on mediumism and psychology. I could write a whole piece on that fascinating subtext alone. Nightmare Alley is alluring, taught despite its long runtime and has two stark, perfectly rendered aesthetics which both clash and compliment one another. For a while Nightmare Alley was the most tense I’ve been watching a film for a long time. It is all very well acted but for me David Strathairn’s haunted, booze soaked magician Pete stood out as a pivotal and memorable character.

There are plot events that I have to say were telegraphed a bit, but that is my only complaint as Nightmare Alley is such wonderfully made, absorbing, ensconcing cinema that at the end I didn’t care all that much. Particularly as that end is still handled rather hauntingly. I want to wheel out the superlative trough and dump them all, all of the superlatives, with humble unworthiness at del Toro’s feet. Then rub his feet for good luck. I think that’s how it works, or is that statues? I honestly don’t know how to pour platitudes out perfectly enough for this film.

The only reason I hesitate on giving Nightmare Alley a perfect score is that I didn’t think its slight of hand was quite clever enough. Perhaps that’s me being mean but it is still far and away the best film I’ve seen this year and I haven’t seen anything like it at all in a lot longer than that. See it, see it now. 9.5/10