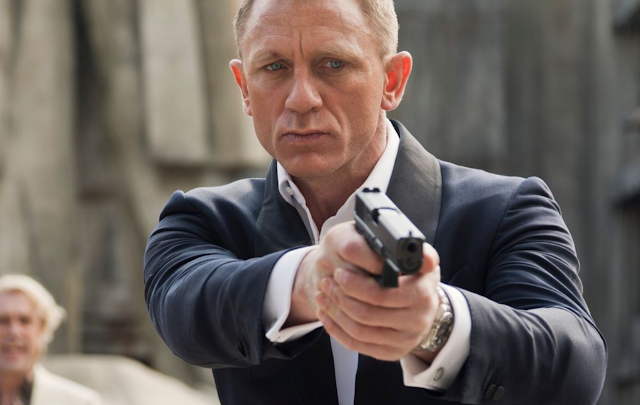 The newest Bond film, No Time to Die, is available to rent at home for a whopping £15.99 via Amazon Prime. For better or worse this system exists and we must deal with it (and I did enjoy Mortal Kombat). I toyed with buying, sorry, renting because it fucks off after 48 hours, the new 007. As a kid I loved Ian Fleming's Bond books; as I’ve grown older I’ve become slowly less tolerant of pretty much everything including myself but James Bond’s stock has plummeted like 70 year old balls from a jock strap.

Instead of pissing away £15.99 my back up brain, which normally turns up late saying “what if she was lying about being on the pill” functioned in advance rather than arrears where it is no use. How about watch one of the other Daniel Craig Bond films, it said. Skyfall everyone bangs on about, do that, it’s only £1.99. So I listened to my brain Jeff Bezos and bought rented Skyfall.

This venture into the unknown was ruined when I started Skyfall and my brain screamed, “Oh fuck, this is the Taken 3 Turkish rooftop opener film. I’ve seen this scene twice before. Yep, Bond being a cufflink wanker. You should have picked a different one.” I told you it’s Captain Hindsight, my grey matter.

I stuck with Skyfall and I was right to, I'd barely seen an iota in my early efforts. As I persevered I clock-watched and I think both previous times I gave up at the cufflink wanker shot on the train from a digger. Sounds ludicrous, is ludicrous. Maybe the London setting will calm me when it comes, bring it home and change my mind. When I realised how far I was into Skyfall, and how much more I had to go, reaching the Adele song was suddenly a badge of honour. Not a great one, like a one week sobriety coin- it’s not a life changer but it’s a start.

At an hour into Skyfall if you’re still watching well done and if you’re still watching and sober then you’re a better person than me. This film is long and No Time to Die is longer still. I began living Skyfall minute to minute. Daniel Craig’s James Bond, the suave and sophisticated spy, looks like a retired Welsh rugby player who crowdfunded plastic surgery and is about as incognito in the field as a burst colostomy bag. 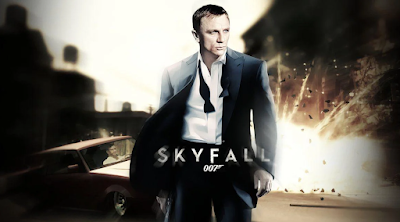 Why does Bond annoy me so much? Well, I spend my time wincing, for one. Sassy, sassy James Bond does ridiculous things and we’re all supposed to pretend he’s brilliant because he’s British but has all the character and false machismo of a bodybuilder’s dying fart.

What, I think, puts me off most about Bond films, particularly these Daniel Craig ones, is that they’re as if not more ludicrous than most action fare, but pretend at being serious so get noshed off because they also have a big budget and look great. And they do look great. Bond is stupid action you can pretend to be classy watching. Admit you like Statham!

James’s pithy remarks are an established trade tool, a little light thrown on the dark. Some snide fun. Only they aren’t. If he wryly remarked “well I didn’t force you to drink the roofies”, then touched his cufflinks and raised a sardonic eyebrow you’d not bat an eyelid. Sassy Bond.

Just like Skyfall, this review will finish on whatever kind of a high it can still achieve. Here are some lovely thoughts I took away from the £1.99 rental Jeff Bezos gifted me for £1.99. How important do you have to be in Government/ Home Security before it is acceptable to booze on the job? A pint at lunch? A classy Brandy pre lunch? A Martini, pre coercersed sex? I’d love to say I wish day drinking was ok while at work, but clearly without it James would be better at his job, so don’t drink at work, you might end up with John McAfee squatting over you.

Skyfall, I’ll admit it, is better on the big screen than my two failed, disinterested viewings and I warmed to it briefly, I can’t remember when but it wasn’t for long. The visuals towards the end were stark and eye catching. Genuine quality. But that’s what a big budget and a Director like Sam Mendes get you. Actors don’t ask anything about being offered a Bond part other than “how much?”. Even though starring as John McAfee in Scatfall wouldn’t kill their career and even if it did they’d be rich and no doubt in some all time classic gifs. Stunt butt.

Skyfall never grabbed me. I was impressed in places but not with anything related to the story and I will always find Bond a very, very faulty icon. Even for someone who never runs out of words, 007 will be something I can’t describe my issues with.

McDonald’s made their name and fortune by ensuring every meal is exactly the same wherever you are. This is the Bond franchise, too. Except for weeding out most of the dubious sexual attitudes, kinda, every film is the same and there’s 481 of them now. It’s been so long George Lazenby has successfully had enough plastic surgery that he’s the new Bond. A four headed squid which identifies as a British spy, so it’s fine. It’s all fine. There’s a big budget and it’s less sexually weird unless you’re in Japan. 4/10