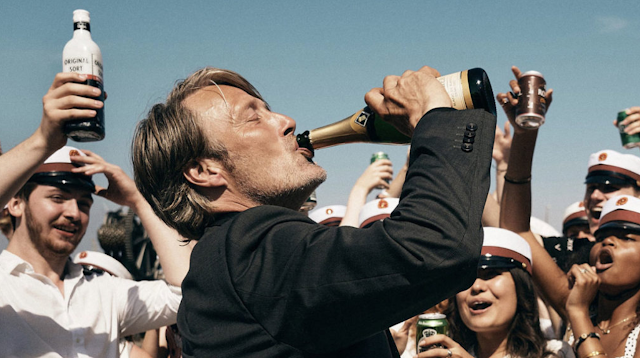 It’s Bedsit Cinema’s fourth birthday this weekend. Something I started on a whim now has well over 300 reviews and some people seem to enjoy them. For me the site has been literally a mental saviour, something to keep me going when the faulty brain jars up. Thank you for reading. Let’s have a lovely little drink to celebrate. There’s always an excuse for a tipple.

You might not believe it, but a lot of Bedsit Cinema reviews I’ve written while tipsy. Some, even, while I’ve been blind drunk and the consequent re-edit has then taken me days. There are sober reviews, but you don’t want to read them; I’m boring when I’m sober. I’m of the belief that a few glasses of wine increases my creativity, partially by removing my filter- even if I have to reapply said filter when reading it back. I trialed this approach getting a degree in philosophy, so it isn’t entirely without merit.

This is essentially the premise of Danish dramadey Another Round.

The deliciously brilliant, utterly understatedly charismatic Mads Mikkelsen is completely unrecognisable as a drab teacher devoid of ideas and desire. His home life echoes his work: perfunctory marriage and fatherhood. A chore. Mads’ Martin is a dullard, staid, static and as exciting as algae. His coworkers at the high school are in the same funk, their students disengaged and them ultimately admitting the dearth of joy they inhabit. It’s less outright depression, more the complete absence of joy they finally admit to themselves. Over drinks.

The theory is posited by one of them, I forget who, I was drunk, that a certain amount of blood in your booze system is beneficial. The quartet set out to test the theory. Another Round starts rather serious, which I wasn’t expecting, but loosens up and leers into hilarity at its middle as the secret, increasingly sozzled society stagger their way through life. You can rock up pissed to a presentation, deliver what you think was a spot on, entertaining breakdown of Socratic dialogue then go and play pool and doing shots at Riley’s and it’s not a problem. There are no consequences. Until the afternoon lecture. 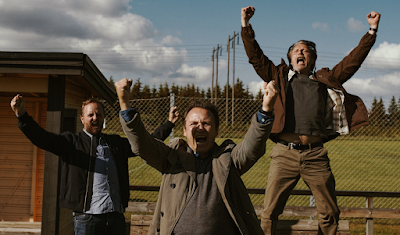 Eventually I was able to get over my insecurity at being a terrible academic, only doing it because I had nothing else at the time, unable to understand logic. I credit booze with some of this. I still don’t understand logic. Or rather I forgot logic because I was drunk. Or am drunk. What is drunk anymore? That’s the real question! Ultimately drinking isn't actually the answer, it is sometimes the conduit, but really if you’re doing it and not enjoying it, you’re not doing it right. Mads and his men find the leg-up from liquor life changing.

Doctors, famously completely sober and abstinent, will piously tell you any alcohol is bad alcohol. Alcohol does a lot of good, for example my lunch breaks in the park are more fun and less cold. Plus I sleep better at my desk in the afternoon. Unlike me, the characters in Another Round descend into “problem” drinking. It is funny for a while before it gets concerning; an amusing but uncomfortable slippery slope towards seriousness.

Another Round, as you may have guessed, made me challenge myself and relationship with wine (I only drink wine now because I’m a lush). More importantly, it is fucking brilliant- funny when it need to be, serious when the sober reality hits home and well acted. Depressing but happy, this is one of the best films I’ve seen this year anchored by the magnificent Mads Mikkelsen.

If you’re drunk you might have missed the previous paragraph. Another Round is so good I bought a burgundy shirt because Mads. Men will never stop being boys and alcohol is all about choices, and needs micromanagement, which ironically is really hard when you’re pissed. 9/10

Alcohol, a vice, vices are popular because they're fun. Check out these reviews!...
CHILDREN OF MEN
REQUIEM FOR A DREAM
AMERICAN MADE
DIEGO MARADONA
CASINO
Labels: Adam Thorn Alcoholic Another Round Comedy Danish Cinema Drama For Your Eyes Only hidden gem Mads Mikkelsen