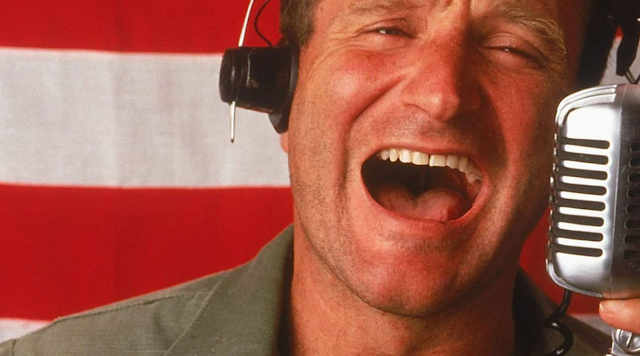 I hate reviewing comedies and most of all I hate reviewing comedies which are good. Like every self aware narcissist I’m always looking for gaps for me to impose myself in. That's where I thrive. With Robin Williams, getting a word in edgeways is damn near impossible, the man was a genius. Anyway that’s my insecurities out of the way, let’s set the scene...

Saigon 1965. The staid, downright dull U.S. Armed Forces radio service acquires an irreverent DJ called Adrian Cronauer. Cronauer doesn’t respect authority and has a scattergun style which brings the troops serving in the Vietnam War joy, reprieve from the deadly day to day, but brings him a headache from his commanding officers. Cronauer's biggest fight, it seems, is just to be able to be himself.

Robin Williams leads, Forest Whittaker supports playing his assistant, caught between power and preference for his new friend, as the two instantly bond. Chinatra Sukapatana is Trinh, a local girl who Cronauer immediately falls head over heels for; her brother Tuan (Tom. T. Tran) a reluctant companion to the wildfire DJ. Good Morning Vietnam is based on the real life wartime Army radio host, oddly enough, called Adrian Cronauer but from what I can see the film applies artistic license liberally.

My memory of Good Morning Vietnam was that I liked it but that it was an unbalanced film, unsure as to whether it was a drama or a comedy. My memory was off (it often is), but only slightly. I was instantly giggling at every small Williamsism; every tick, every bit of wit and random character or adlib. While it opens as such a warmhearted film about authority and the need to escape from darkness with laughs, there is, however, a simmering unease which it is obvious will eventually boil over. 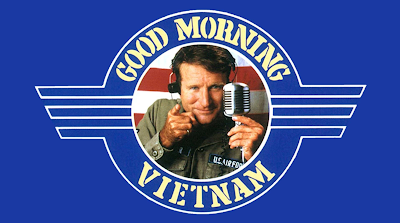 When it does, the entire film’s tone turns and I think this is where my memory malfunctions. While there are still laughs, Good Morning Vietnam weaves in the drama well and leaves you caught up in it. Moreover, it is always really a drama, the shift lies in the reality coming to the fore and the comedy, the distraction from omnipresent death, subsiding. The drama is driven, rather than the comedy spoiled by the film’s events. The shift in emphasis is excellently handled by Barry Levinson but it is a little predictable as to where it might go.

This is a film completely centering on a masterful Robin Williams performance, on his finest form. That’s a high bar. Apparently he adlibbed almost all of his lines; I’d be astonished to hear of a major production these days giving such freedom to their star. So funny in places that it is easy to forget there’s a war going on- and that’s entirely the point.

I could watch Robin Williams on form for hours or days, even completely out of context. Good Morning Vietnam, despite my recall, feels so comfortable in its own skin but is elevated by one of the finest comedy performances its star ever produced. 8/10

Drama sometimes needs a laugh. Check out these reviews of serious stories which aren't po-faced!...
CALVARY