Matt Damon I like. Jon Bernthal is always great. Director James Mangold made Cop Land, Walk the Line and Logan and will soon helm the fifth Indiana Jones outing. In case you think I’m being sexist and not mentioning any women, I’m not because this film is all about wangs! Wieners! Cars! I’m sure there are women really into cars on an almost sexual level but I’m not and this is my website and I wanted to just acknowledge that before I’m accused of sexism. 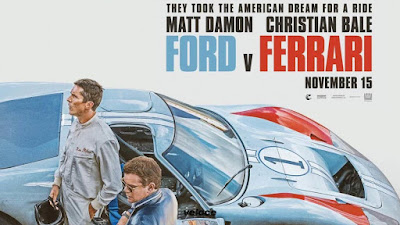 My mum used to drive us around in a banged out Peugeot 209 painted a colour best described as metallic diarrhoea. Someone made a snarky comment about it once, I didn’t care, a car gets you from A to B. That’s what cars do, only sometimes A to B has to be quicker than a school run. Gears, torque, wheels, windows… all mean nothing to me and these are the sort of buzzwords which would cause me to glaze over talking to a dodgy mechanic, allowing them to then rip me off. But I don’t drive because I have epilepsy, so I win!

A lack of knowledge about automobiles also works in my favour as I had no idea about what happened in Le Mans ‘66, it being based on  real-life events, and could enjoy the film not knowing who wins, loses, lives or dies. The film is a remake of Le Mans, made in 1971 and involves a Le Mans event (long arsed race) where Ford (American) rallied to compete with Ferrari (Italian).

For some reason even though I have zero interest in car racing, I very early had the feeling I’d love Le Mans ‘66. Le Mans ‘66 is a very easy film to become involved in. Fast cars are exciting even on an “I don’t care about the gear change or whatever appropriate technical phrase works here” level. Sometimes. It is fun and exciting and I think I mentioned that you’ll even forget Christian Bale is a bit of a cunt, because the characters are engaging. The film looks great, whizzes by and will have you gripped.

Shockingly entertaining for a film about people who love petrol, Le Mans ‘66 carries a lot more mass-appeal than it may appear to. 8/10

*Apparently thesbianity isn’t a spelling error. I didn’t get the wobbly red line of idiocy. Maybe my PC is broken.

Despite not being into cars, there are more reviews with driving them than I thought, check them out...

SORRY WE MISSED YOU