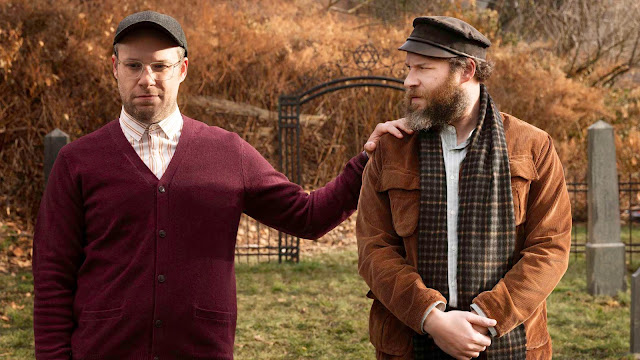 An American Pickle (2020)
Spoiler Free
Comedy
Rated 12
Rented from For Your Eyes Only, Forest Hill
Also available on Amazon

Sometimes, just sometimes, I’ll deliberately walk right into a film knowing zilch about it. I normally IMDb everything as if I’m scared the film will give me the clap if I haven’t. Don't you all too? If not I have some condoms I'm selling. I tell myself this ignorance is an achievement, because relying on IMDb is exactly what the man wants us to do. Yay me us.

An American Pickle, unsurprisingly given the last paragraph, was one of those films. I put it on knowing nothing about it, except what its box said. Full disclosure, I didn't read the box. I put it on knowing it had a picture on the box and that the good thing about having a local video rental place is that I can ask Gulam or John who work at For Your Eyes Only in Forest Hill what the real-life consensus is. Gulam said go for it, he knows my tastes, so I went for it.

Seth Rogen I often enjoy and he was about the only name I recognised involved in An American Pickle. He is in it twice though, playing Jewish (this is explicit and important) relatives Herschel and Ben Greenbaum, born a century apart. This could have gone either way. Double bubble, or double detritus. However I was still moderately apprehensive. These below the radar comedies with people you normally find funny can go properly tits up. Surely there’s a reason I don’t know about it, I wondered to myself, assured in my own omniscience of cinema. 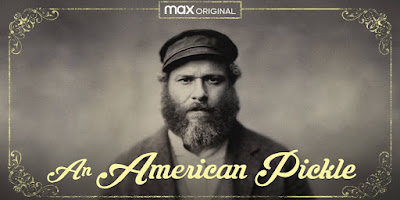 My Grandad had a motto: Faith, Family, Friends. Which I love, but because of being a heathen I have swapped in Food for Faith. I am not dissimilar to Ben Greenbaum in An American Pickle. Faced with the devout, determined nature of his (pickled) one hundred and something year old relative he seems an awful ingrate with no work ethic. Despite his (pickled) relative Herschel being the protagonist, both enjoy their moments- just as Rogen clearly enjoys himself playing them.

A time travel plot as old as salt. A fish out of water (a Jew out of pickle?*) story. I knew exactly where it was going, though instantly amused by the ever-so-slightly Borat humour. The film didn’t go the way I thought it would at all, however. This was a nice surprise and honestly although it’s never going to be a mould breaker, An American Pickle is as solid as salt, doing exactly what it says on the tin. With just that little bit of tang, like saline.

I’m pretty sure you’re not supposed to drink saline, but I did it just for you. Don’t drink saline.

A good natured and very funny film which doesn’t go exactly where you think it might. If you haven’t seen the trailer that is. Do not see the trailer. You need no more insight than this, go in “blind”. I laughed and I cared and I couldn’t have wished for much more really. A strong 7/10 for a film I’ll watch again and I think has an undeserved IMDb score and presence.

Want another hidden gem? Try these reviews...
BLOW THE MAN DOWN THE DARK VALLEY
BAD DAY FOR THE CUT
THE DEVIL ALL THE TIME
BOY WONDER
Labels: 7/10 Adam Thorn America An American Pickle Comedy Do not see the trailer Family Fish out of water For Your Eyes Only HBO hidden gem Jewish Judaism Review Seth Rogen Time travel