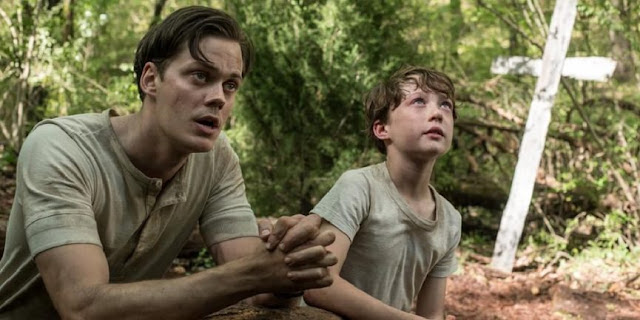 The Guardian’s Peter Bradshaw review gave The Devil All the Time three out of five. If Peter Bradshaw falls in the middle (or thereabouts) on a film I’ll usually watch it. I like comparing my opinion to his. In fact, I like comparing my opinion to his full stop; it’s a bit of a preoccupation I have with learning how wanky I’ve become. And on not becoming the Bradshaw brand of wanky, so far so good, you’ll be completely indifferent about knowing.

The Devil All the Time is a new Netflix offering, based on Donald Ray Pollock's 2011 book, which has slipped under the radar a bit. Maybe the algorithms which dictate what Netflix throw at me specifically mean that for you the film hasn't, but frankly I’d be surprised if Netflix hasn’t noticed I vie for the violent- and this has plenty of violence. It’s not all about that, but it is there.

An excellent cast including Tom Holland, Jason Clarke, Bill Skarsgård, Riley Keogh and Robert Pattinson all excel. I only take exception with Sebastian Stan’s performance. With his padded cheeks and odd demeanor, Stan’s Deputy Bodecker is trying to be Marlon Brando in the Godfather, Casey Affleck in The Killer Inside Me and Vincent D’Onofrio in Full Metal Jacket all at once. Sadly he is not as good as any of those actors and he is distractingly unconvincing.

Stan aside, there wasn’t much I didn’t like in The Devil All the Time. 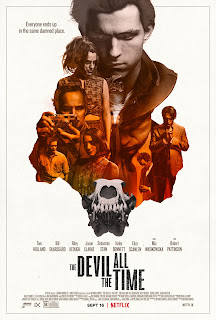 A menagerie of mortal monsters gravitate around one another in a story set in Ohio and West Virginia between the Second World War and the Vietnam War. I realise to Americans what we in Europe call the Second World War is largely known as just the war, but it’s not our fault you pussied out of the first one. Those who know me will know I LOVE the southern states of America and the setting of The Devil All the Time was always going to draw me in.

With its themes of religion, naivety and vengeance The Devil All the Time ticks all the boxes for the location and era, too. Family dramas intertwine with faith and the criminally inclined weave their way through both and also circle the outside of the central characters, too. I’d go into more detail but you really don’t need it. The film feels somewhat epic, a long, sprawling story with many main players, but one which keeps the attention and doesn’t always take you where you expect.

A hidden gem. The Devil All the Time reminded me a lot of Legends of the Fall, although it is a much darker beast. A longer film at two and a half hours which doesn’t have any slack in it and conjures up some lovely twists and turns as the destruction of people on other people drags you to the end. I disagree with Peter Bradshaw but in the nicest way, 8/10

For more southern glory check out these reviews...