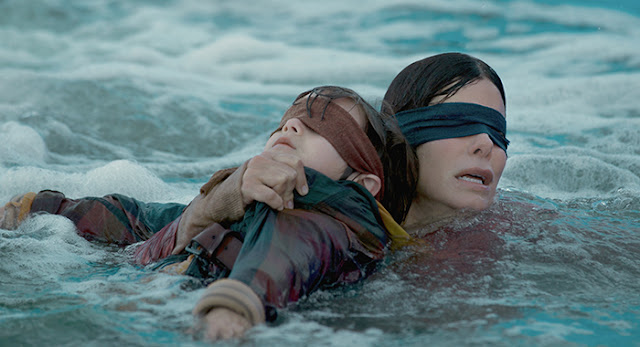 Although I enjoyed The Devil All the Time, it was the best of a not so impressive recent collection of Netflix original films. Bird Box was one I hadn’t seen and the reason for that was simple; I didn’t like the look of it. Bird Box’s promotional material made it look like some sort of weird, road river trip with Sandra Bullock and two children. All of them blindfolded. Didn't sound great to me.

A friend suggested that I give Bird Box a break and watch it. Thanks to the fact that I’m isolating and thus bored to the core, I whacked it on.

Immediately I realised I hadn’t really paid attention to the trailer or in fact read the plot summary. Bird Box is not (just) a river trip with blindfolded children and Sandra Bullock. It is, however, very much not an original film, for better and for worse.

Bird Box borrows from a plethora of similar scare-sci-fi, which I’ll document as I go on. A mysterious force causes mass suicides. If you’ve watched as many films as me, or even read my review of The Happening, you’re probably thinking this sounds a lot like the plot of The Happening- and you’d be right. This is almost the exact plot of The Happening, something I hoped I’d shake through the course of the film. I did, in a way.

Sandra Bullock’s pregnant character whose name I forget along with all other character names, is forced to seek refuge in a house with a smorgasbord of random other members of the public: group dynamics, paranoia and the ever-present threat of supernatural death lurking outside make for tension. Now, you might at this point be thinking, that sounds a lot like The Mist. You’d be right, this part is very much like the plot of The Mist.

Throwing in something of a casting curveball, none other than cult Brit star Tom Hollander shows up*! Whose name I always type for reviews of films starring Tom Holland then have to go back and edit because Spider-Man and Simon Foster are not the same person. Although In the Loop’s hapless politician Foster would be an awesome cover for Spidey rather than a show off teenager. In my opinion. Which is probably why Marvel Studios never got back to me. 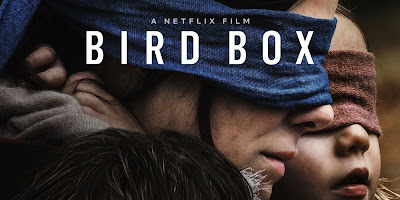 Events lead to the blindfolded aqua-escape so well publicised. They can’t look, you see, for fear of causing the murderous supernatural force to exercise their immediate, violent demise. Now. If you’re thinking, oh having to negate one of the five senses, such as sight or maybe even sound, while trying to raise children in a world where this is the norm is very similar to the plot of A Quiet Place, then guess what...

I have to say that Bird Box reminds me of/ is borrowing from so many other films I’m tempted to call it derivative. I mean obviously it is derivative but I kept watching.

One thing I will pick out, Sandra’s character has a rather interesting line in how to parent and tell the truth to kids. This made me wonder about whether for parents there is a fine line between lying to children and nurturing hope. I don’t have kids but I’d argue that yes there is. I mean Santa is an outright lie, what hope would Santa be nurturing? A fat, elderly man will creep into your room at night and drink booze while watching you sleep, but at least he'll leave you presents as hush money.

Anyway, I made the end and no doubt kept watching because for all its issues Bird Box is not a terrible film, just not an original one, and one whose repetitions I don’t mind. Plus for some reason I actually found the end of Bird Box quite moving.

A more expansive narrative than I was expecting which was a nice surprise, and really what kept me going along with the mystery of what is actually happening. Even though it’s not really a mystery. 6/10