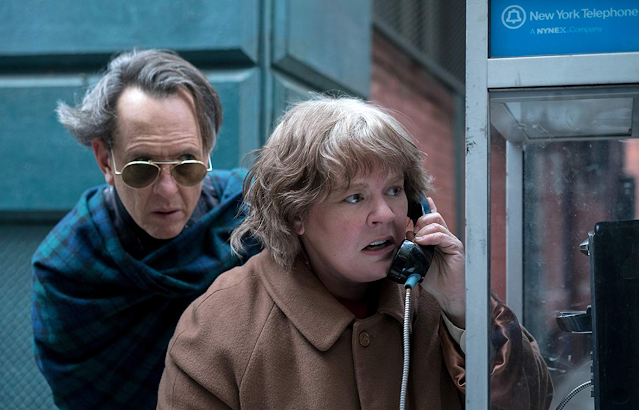 Can You Ever Forgive Me? is a biography of real life author-come-fraudster Lee Israel, played by Melissa McCarthy. For some reason McCarthy is divisive, I don’t really understand why people dislike her but I then don’t understand a lot of things. Sorry to burst the bubble of my omniscience. I think McCarthy is very funny, and Richard E. Grant is always good value- he’s on great form here as an amusing mess of a man who is really only Lee’s friend through circumstance. The two bungle their way through illegal, literary smash and grabs.

Lee’s criminal enterprise would be tricky in the modern day, but it was a niche world she lived in/ targeted. People so in love with writers they’ll pour over their personal correspondence is a level of interest I would never even pretend to have. Her battles with herself as a person go hand in hand with her predicament and there are laughs in the car crash she has created for herself, her flailing at solving her problems only digging deeper pits to battle out of. While Israel seems like a fascinating woman, the film is pretty functional and straightforward. There’s nothing new and the structure never felt likely to stray from the generic and spring any surprises. That said, it is interesting and well made, with good performances, which is why I kept watching. Can You Ever Forgive Me? could have been a far darker film, but it’s probably for the best that it isn’t- were Lee Isreal portrayed any less favourably I think the viewer might struggle to sympathise.

I was never bored but Can You Ever Forgive Me? is not a film I feel any need to see again. That probably sounds harsh, because it’s a perfectly decent way to spend almost two hours and you might want to read more into its subject, Lee Israel, because as McCarthy plays her at least, she was a woman of talent and conflict. 6/10

Dramedys, it's like a comedy, but not as funny. Sometimes. Check these reviews out!..
I, TONYA GOOD MORNING VIETNAM BLOW THE MAN DOWN JOJO RABBIT THE FAVOURITE
Labels: Adam Thorn Biography Can You Ever Forgive Me Comedy Crime Disney Drama Dramedy Female Protagonist Fraud Melissa McCarthy Richard E. Grant Writers