Hearts of Darkness: A Filmmaker’s Apocalypse (1991) 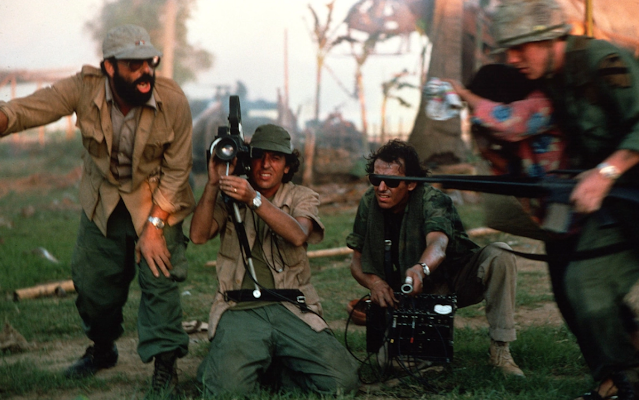 “My film is not a movie. My film is not about Vietnam. It is Vietnam. We were in the jungle. There were too many of us. We had access to too much money. Too much equipment. And little by little we went insane.”
Francis Ford Coppola

A genuine, solid 10/10, masterpiece, Apocalypse Now did not happen easily. In fact, it might have more disastrous shoot anecdotes than any film I’ve ever read about. Hearts of Darkness: A Filmmaker’s Apocalypse is a 96 minute documentary chronicling the epic clusterfuck that entailed bringing “a $20m dollar disaster” to the screen.

This review is meant as an accompaniment to the PAGE TO SCREEN: APOCALYPSE NOW piece on Bedsit Cinema, which I implore you to read because it’s really good and I’ll love you forever. Rather than a straightforward review of the documentary, which is decent enough (6/10) and interesting but not a piece of powerful filmmaking per se, this piece will just give you an idea of quite what Francis Ford Coppola and team had to deal with.

The US Army refused to lend any support to the film because of its story, so Apocalypse Now was filmed in the Philippines which was under the control of Dictator General Marcos, with the Army he’d promised for filming often being recalled for military exercises during scheduled filming.

Marlon Brando, one of the finest actors ever, produces an astonishing, complex performance as Colonel Kurtz in Apocalypse Now. However, it was not the one Ford Coppola was initially after and getting what is on the screen out of him sounds like one long pain in the arse. Despite having worked with For Coppola twice before so presumably having some respect for him, Brando displayed none of it.

Brando rocked up to the shoot so overweight (88lbs!) they had to film around it and completely change the physicality of the character they’d planned to portray. He was drunk and had also not read the book or learned his lines and even insisted his character not be called Kurtz- something he later decided to reverse so Kurtz then had to be dubbed in over what had been filmed. He constantly threatened to quit and keep his $1,000,000 advance.

Brando also fell out with co-star Dennis Hopper and the two refused to share a set. Brando sounds like a dickhead, in my humble opinion. If ever there was a case for letting an actor do what he wants, this might well be an argument both for and against it.

After many others turned the role down, Harvey Kietel was originally cast as Captain Willard but fired a couple of weeks into filming and his replacement Martin Sheen then had a heart attack which delayed the shoot further. Many of the cast spent their time on location mangled on drugs and Laurence Fishburne who was only in his teens developed an addiction*. The sets were also destroyed by a typhoon, which delayed the shoot even further.

Francis Ford Coppola, by this point hemorrhaging vast sums of his own money into the project, lost 100lbs and threatened suicide on more than one occasion. The edit took months and at many points the film seemed like it wouldn’t ever be finished.

Despite all this, Apocalypse Now made it, and the world of cinema is a better place for it. Phew.

*I've read/ seen this somewhere but am struggling to find a source to back it up properly.