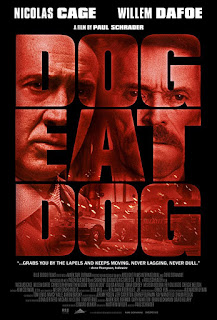 Truthfully, this final part of the cutting room floor could be called: The Weird and The Indifferent. But it's much less catchy. Plus there are some genuinely weird films, and weird decisions made in the making of some of these films. So weird it is!

Tagline: There are four on IMDb, all of them just praise for the film, which is worrying. When a film tries really hard to convince you it is good, my suspicions are raised. That I paid a pound for the Blu Ray from Poundland, also had me on alert for a turkey.

Premise: Ex cons have a go at kidnapping a gangster's child, but are hampered by their own ineptitude.

Delivery: Dog Eat Dog is bonkers from the opening scene, the madness of its characters conveyed through the colourful, erratic directing style and editing choices, which are occasionally derivative of one particular early Darren Aronofsky film. Not a criticism per se, just that when you're watching a film, and going, “oh this really reminds me of....” you're not massively involved with the film you're watching. Hey, it cost me a pound, I wasn't expecting The Godfather.

The cast are pretty good, Nic Cage and Willem Dafoe have both become somewhat parodies of their younger selves these days, but when used to good effect those older selves are still entertaining. Dog Eat Dog does get good value from them both, and although the film is somewhat straightforward plotwise, it is still not the turkey I feared. You can't accuse it of being boring, even if the plot is predictable.

Imbeciles kidnapping an infant child? All a bit Lindbergh...

It's weird, I'll give it that! I've said that a lot haven't I. It is very weird though! 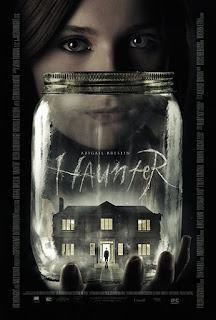 From the director of Cube, which grew on me, and Splice, which I thought was a really fresh and original film.

At the heart of every good ghost story is a good mystery is my theory, which I never mention- and the mystery in Haunter is what drives it. Sometimes the solution to the mystery kills the concept however, if it is predictable or, conversely, contrived.

Abigail Breslin stars, who was so brilliant in Little Miss Sunshine, and for a young actress she does well as the lead.

As she cottons onto the mystery, the plot develops (thickens) which is good as I hate caught in the loop storylines a little bit, although Star Trek: Discovery did have a good take on it recently.

A sort of horror mash up of some random films such as Groundhog Day, The Mist, Ouija, and some others which I won't mention as they might give it away

I haven't been stoned in years. Haunter seems like exactly the kind of film stoners would watch and talk about how it, “blew their mind”. Not a criticism, just an observation. It's a bit high concept. 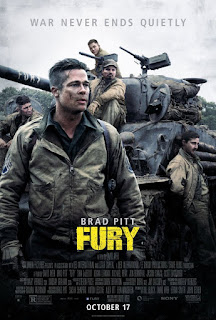 Is this a film which portends to realism? No. It is not. It's stylised beyond belief, the haircuts, the dialogue etc.

The use of tracers is annoying, almost as if they think we're too stupid to understand gunfire.

You need to develop a doctor like thick skin when it comes to death. Pretty much the whole film's message.

Brad Pitt and team saves the world, with perfect hair.

Fury is more an action film set in war than a war film because there is zero attempt at reality except for it stealing the saturated look of Saving Private Ryan. Which wasn't really what war looked like, if you'd been there, Omaha beach wasn't all grainy like in old photos, Spielberg made it look like old photos because that's how we picture the war now. The wily old fox!

Fury is rewatcheable in the same way anything which neither offends or challenges is.

Did like the way it expressed the unique situation of when you know you have to be brave, but only briefly.

It is really hard to understand how quickly death whips one away. Consciousness makes way for nothing. <I've seen people die both quickly and slowly, it is always surreal (for me, worse for them). 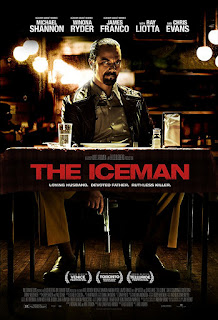 Michael Shannon is one of my favourite actors.

The book this film is based on, by the same name, is a enthralling and appalling account of Richard Kulinski, a man who claimed to have murdered over 200 people (book, 100 Wikipedia, but either way probably a few too many murders).

If this kind of stuff is what you're into, and why wouldn't it be- I'm not here to judge, then the HBO interviews with Kuklinski are worth a view. They're terrifying in a way no feature film can capture, but they're also fascinating.

Although Shannon is disturbingly intense and plays the man well, the film waters him down somewhat in order not to lose the viewer, I assume. But why? He was a cunt, show that! They also confuse the stories of Kuklinski and the DeMeo crew, which annoyed me a bit.