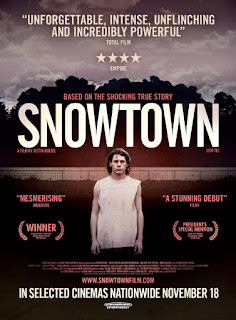 Tagline: “Based on the shocking true story.” To the point, and accurate, the true story is not even half covered in the film as it's so horrific.

Premise: The film follows young Jamie, who lives in a run down area near Adelaide and falls in with his mother's charismatic, but clearly dangerous, boyfriend.

Delivery: The reason I sought Snowtown out was that thanks to my sister, who shares an interest in the macabre, I got into the Casefile podcast. Get listening to it she said, you won't be able to put it down she said. As usual she was right, and so hooked on it was I that one night I went to bed with it playing. Never do this. The series is brilliantly researched and narrated with aplomb by it's deep voiced Australian host. However, when I woke up in the middle of the night to hear a husky antipodean man describing a woman having her throat cut I almost shit the bed, before realising it was only my phone still playing several episodes later*.

Casefile covers the Snowtown murders in depth, but I was keen to see the dramatised version and whether it would flesh out these people I only knew by the podcast. The reputation of Snowtown was so good I got excited for Macbeth off the back of it, despite having never seen it back then. Justin Kurzel was briefly a hugely exciting director, then Assassin's Creed happened. His slated films on IMDb do sound promising though, and Macbeth was good, so fingers crossed.

All I can really say about Snowtown, not wanting to give too much away, is that it is a film which deals very well with a “difficult subject matter”. That being murder, and particularly the abuse of children; which is always a touchy subject. The film gets across the awfulness of this, without descending into detail too explicitly, it is expertly handled. The acting is absolutely superb, particularly Daniel Henshall, who is entrancing and repulsive at once. What the film really does well, for me, is blur the ethical lines. On one hand what John Bunting did was reprehnsible and clearly not vigilante justice, on the other, you can see how he got there- particularly with more knowledge of the case from the podcast.

Bedsit it? The style of Snowtown reminded me of Tyrannosaur, but meets Henry: Portrait of a Serial Killer. It is lean, clearly made on a budget and conveys the subject matter cleverly. It was fascinating to see how the film and podcast fit together, but neither were what I'd call easy viewing. If it sounds like something you couldn't stomach, don't see it. 7/10

*I do also worry about the longer term effects of having relentless human atrocity and suffering beamed into your consciousness ad infinitum. Particularly if, like me, the normal state of conscious isn't a field of roses.