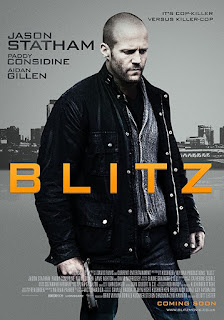 Tagline: “It's cop-killer vs killer-cop.” For some reason I really like this, it nails the film's colours to the mast.

Premise: Someone's killing police in London. Just say “The Stath” five times in the mirror, he shall appear!

I can't believe this is my first review of a film of The Stath (I think?). I love The Stath. If you don't love The Stath then you need to, well, at least not read this exact post but reaching further consider the nature of your very existence. I hear the monasteries are hiring; probably after a spate of substantiated accusations... Blitz even has Littlefinger and Paddy Considine in it, so what more is there to like? Well, plenty of gruff machismo, some violence and quite a lot of The Stath being all cool and Stath-like, making funny, sometimes drunk remarks.

Even if you aren't a huge Jason Statham fan, otherwise known as The Stath by the way, Blitz is good entertainment. Which to be fair is actually his speciality, making films which on paper should be like sieving poo with your teeth, actually quite fun. Like sieving something else, not with your teeth. Blitz has an excellent cast, David Morrissey, Mark Rylance (unrecognisable), Ned Dennehy (ditto, sort of), Luke Evans, Zawe Ashton, plus real Game of Thrones geeks might spot a cameo amongst all the bloodshed.

There's a cop killer on the loose, and The Stath and Paddy Considine are united slightly against their will to find him. Blitz is a pretty classic cop duo/ buddy movie- a la Lethal Weapon. It's not ashamed to be what it is and nor should you be for watching it. The writing is excellent, credit to Nathan Parker (screenplay) and Ken Bruen (novel), but The Stath is stand out. Statham is so much better as an anti-hero, which I know most of his films have tried to capture (please The Meg, please) but few have done so well as Blitz.

There's not really much more to tell you, a humorous, gritty cop killer drama- thriller can't be beyond your imagination. If it is, start with Peppa Pig, and work your way up, see you in 18-21 years. Blitz is cracking entertainment, but was never going to win any awards.

Bedsit it? Go for it! Blitz is good solid fun, well presented. A great Friday film. 7/10