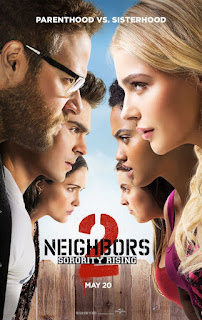 Premise: A sorority moves in to the frat house formerly occupied in Bad Neighbours by Zac Efron's unruly mob. Seth Rogen and Rose Byrne are still next door, but now they have a kid.

Delivery: “When my dad dropped me off at college, he gave me a rape whistle and this huge speech about how to behave myself as a young woman.”

I went to America some years ago, and while I loved the place (largely), the one thing you'll learn very quickly if your mate is insistent on finding a party with 19 year old women, is that fraternities exist to fend off other tribes from what they see as their women. Namely, any woman they fancy, and all those in a sorority. This is particularly annoying as American men age at physically twice the rate of Europeans, to twice the size. They all have beards at fifteen, and are bald and fat before they're old enough to drink legally. Probably from the stress of not being able to drink legally, I'd imagine.

Essentially, we were fending off easily riled imbeciles with the brute strength and grace of an Eastern Block people carrier, and the horn for whomsoever we spoke to, no matter how innocently. One dickhead told a girl who lent me a lighter to leave. I am not kidding, frats are cunts. Fuck you frats, because for all your aggressive chest beating, my pal still went out desperately fumbling around in the dark for a sorority. No metaphor needed. He didn't get beat up though, or off, for that matter.

While Bad Neighbours was concerned with a frat house next door battle, the makers of Bad Neighbours 2 really mixed up the concept, putting a sorority next door to the same couple. Mind blown, right? The first time I put the film on I really wasn't expecting much, mainly due to the uninspired concept, tagline and poster. However, the subversive element to the sorority (girls setting up a sorority which is a fuck you to the patriarchy of the regular frat/sorority relationship), and the clever role reversal both narratively and on jokes, which I'll not go in to so as not to spoil anything, is so well done. As is the material concerned with becoming a parent.

It really is quality writing, and I have to say the delivery from Moretz is excellent, which surprised me. Ditto Zac Efron, who knew he'd be such an adult-comedy force? My five and three year old, at the time, cousins used to call me Zac Efron. He was in High School Musical, which they adored, and I had longish hair a bit like his. Back then it was offensive to me. Now, they're 15 and 17 and... I'll take that. Zac, come back! I want to be buff and funny and attractive to, well, anyone at all really.

I love the essence of ineptitude Bad Neighbours 2 captures, the spirit of freedom and fuckwittery amongst 18 year-olds away from home for the first time. For some reason it's more powerful with young women than it is with boys as in the first film. Because boys are, can and will be immature dicks from zero to death. Plus there's that daddy element, captured so well in the quote at the top. Lisa Kudrow is superb in her short cameo and there are some brilliant, brilliant lines. Mostly lines delivered with the utmost subtlety, except when not called for. Gross out is largely dead these days, but there are moments, flashes, of the Road Trip days which really work.

Bedsit it? A surprisingly funny, at times edgy, slightly off the wall comedy, with strong delivery and one or two set pieces which will make you chortle. Three view in and still laughing. 7/10