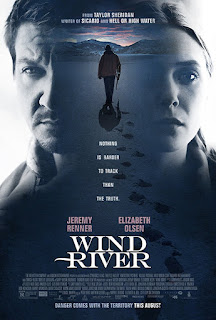 Tagline: “Nothing is harder to track than the truth.” Had loads of really offensive jokes to put here, but now I feel a bit like just a bland, really long sentence about nothing was more entertaining for you as the reader. How are you anyway, reader? We never talk about you on this blog, so make a film and I will, that's a promise. Love you, fuckity bye.

Premise: A crime thriller where a tracker teams up with an FBI agent to solve the mysterious death of a young lady on a snowy Native American reservation.

Delivery: “How do you gauge someone's will to live?”

Jeremy Dahmer, sorry, Renner, and the younger Olsen sister might not scream “great cop partners for a gritty child murder” at you. But then what does? I imagine if you're constantly picturing ensembles for infanticide solving, you're probably already in prison for an horrific crime. Your work is more fan-fiction, I'd imagine. But then what am I doing imagining you imagining that, what the hell is wrong with me, too? It's a fucking minefield this creative process, so I'll just get back to talking about Wind River.

Wind River opens with the discovery of a frozen young woman, and doesn't really get much lighter from there. Whilst both gripping and entertaining, it is also, in its way, shocking and believable. But at its heart this is a murder mystery, the intrigue of that central mystery is what sells any murder investigation thriller and Wind River's screams “PAY ME ATTENTION”. Initially, after the discovery of young Natalie's body, there's a bureaucratic argument. One to do with processes and procedures which illuminates the troubles one may have with any apparently straightforward task in today's world. It was nicely handled and hit home to me as a former NHS worker.

What Wind River excels in is the intricacy of its execution. It is both realistic and beautifully folded, so that the viewer learns things about the crime exactly how and when the films makers intended. For me, this is a huge feat, a huge, huge feat. It's a hard watch in places; the pain of a lost child carved into the creation of it. Credit must go to Taylor Sheridan, who also wrote Sicario and Hell or High Water, and the handsome, talented shit makes his directorial debut here. Renner is astonishingly adroit as an old soul, so well written, and Olsen is good too.

Bedsit it? Definitely. Wind River has flashes of action but the main draw is that core problem solving, with believable protagonists and a strong sense of emotion and justice. The horror of what is happening and has occurred is not swerved, which I like. I always like. 8/10