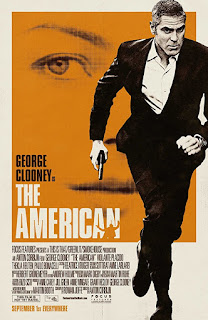 Tagline: “Love is Desolate. Romance is Temporary. Sex is Forever.” Whatever you say, bossman. I'll have six hotwings please.

Delivery: The title of this film, The American, is an oxymoron, because Clooney's character is as quiet and subtle as he can be. This American takes time to learn, and attempts to integrate with other cultures. If only. In the real world he'd rock up, out of breath, wearing a “fanny pack”, asking where the lions were to shoot. Probably. I don't know I'm a xenophobe; I hate the ignorant bastards and I refuse to learn anything about them which may prove me wrong.

If you didn't get that, stop reading now.

The American is directed by Anton Corbijn, who helmed the powerful Ian Curtis bio, Control. If you haven't seen it, do. Beautiful and moving. The American is not on that level, but is not a bad film, depending largely on your taste. I first saw this film when it was released on DVD, through one of those postal services: what a fart in the wind they were. However, I thought I'd buy it even though my sole recollection of the film was just George Clooney being all dishy and beautiful scenery and landscapes. It was 50p. On Blu Ray! I'd buy my nan's sex tape if it was 50p and high definition. It's not, no matter how much time my uncle spends “touching it up”.

My trepidation about The American lead to a substantial shelf life for said high def moviefilm. It sat, forlorn, in my “to watch” section (yes, I have sections) for some months. Eventually I got around to it and my first thought was, other than "I'm glad nan's not in this one", that it's a bit like the Trip. With all the lovely shots of Italy, I kept expecting Clooney to do a Bernard Manning impression, or complain about his love life in a funny voice. He doesn't, but at one point he does tell a prostitute that he's there to get pleasure for him, not to give it to her.

Having never used a prostitute, I imagine selfish pleasure is the only reason a person might visit one. However. Clooney performs oral sex on said woman. Undermining his point and surely every sex ed class ever. What kind of a nutter goes down on a prostitute? What's the sequel called, The American: Outbreak? Not exactly a film for safe sexual practises, but then we're talking about a man who kills people for money, so I suppose living on the edge is kind of his thing. Still though, do not try this at home kids, or at a brothel!

Did I forget to mention he's an assassin? That's because it's easy to forget what The American is about, due to all the lovely shots of the country and gorgeous George doing twat all. If you like your Clooney sultry and broody this is the film for you! His character, who is clearly an amoral killer who would lick the rim of your toilet if you told him it was a lady of the night, is sympathetic, but not in the way the film wants you to find him sympathetic. He's almost like a travelling salesman, on the road, forever lonely. Only he kills people and fucks hookers. Cool huh.

Now, I'm going to use a name that has caused me bother in the past: James Bond. Despite the obvious references to westerns, there's a lot of James Bond about Clooney's character, from the Walther PPK he carries, to the inability to keep his dick in his pants even after being warned, and I think the love letter to Flemming is what stinks the film out on a moral level. Flemming was a cunt. However this is a film and escapism, I'm in Italy with beautiful horizons and sexy, clean, prostitutes who are actually attracted to me, of course bumping off a few people ain't no biggie. You love me for it. Can I sell you a coffee?

Bedsit it? This is where my morality and desire to be entertained clash. Despite The American being (appropriately) devoid of any understanding of the world or its character's impact upon it, and even though nothing really happens... It's quietly absorbing, and it is pretty. It thinks it is better than it is, sure, but plenty of films are guilty of that. 7/10 and I hate myself for that score. Ugh.