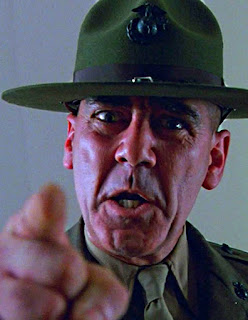 “Did your parents have any children that lived?”

It is always sad when someone dies, except when they're a cunt and I can think of a certain President who might be overdue a fatal embolism, but as further proof that there is no God, R. Lee Ermey has passed away. Easy, I know, to canonise someone you've not met, but the man was appropriately mythical.

As legend has it, which works by way of disclaimer too, Ermey was hired as a military consultant on Full Metal Jacket; a film reviewed on this site only recently. He was so funny and uniquely abusive that the famously laid back and uncontrolling Stanley Kubrik let him freestyle for a bit on camera, to see how he'd do. The story goes that he went up and down the line (or actors playing Vietnam conscripts) for fifteen minutes, without repeating an insult.

With his breakout performance in Full Metal Jacket as a springboard, Ermey slipped into acting life from the military with ease. Roles in some of Bedsit Cinema's favourites came between FMJ and Ronald's death, I had hoped there'd be a few more. Dead Man Walking, Mississippi Burning, Seven, Toy Story and actually, a cameo in the horribly underrated The Frighteners.

As a man who spends his life trying to live against everything my mind tells me, I hate seeing people go when it isn't the right time. Gunny, it wasn't time, but thank you for your service. I will miss you.