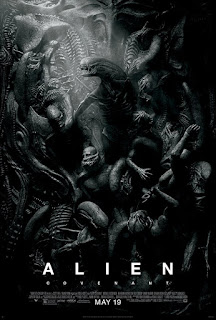 Tagline: There are eight on IMDb, four of which are just one word. “Hide” etc. Shows how hard the PR team worked on selling a film which wasn't massively called for by Joe Public, and often a portent of doom.

Delivery: I am a massive fan of the Alien series; particularly Aliens. I even quite liked Prometheus. In fact, I wrote and illustrated an Alien spin off comic at school with my mate Paul Jewitt, which was confiscated by a po faced, obese, geography teacher. I mean, it was all gore and swearing, and we were making it in her class, but in my defence; geography is really boooooring. River. Hill. City. That's all the geography you need. These days, with google maps you don't even need that. Geography is dead, long live the smart phone!

Anyway, back to the film, which was.... Alien: Covenant, ah yeah, I remember. I first saw it at the cinema, it was supposed to be a date film, but I got stood up. The sad look I got off a fellow cinema goer when she realised I had been was as haunting as any ghost story. I'll never forget that look, or the obvious shame of me being sat with the only empty seat in the IMAX. I'm over it now though, honest. At the end of the film, a fellow cinemagoer complained to his mate that the film, “just wasn't very original.” Alien film number 6? 8 if you include the AvP duo? Not very original? You tool. Fucktards like that don't deserve cinema.

Alien: Covenant might be derivative of its predecessors, but that's precisely why it was made. The Alien series has such a rich sense of myth, mystery and intrigue that Ridley Scott made Prometheus, to attempt to address and explore this universe*. He got unfairly derided for venturing too far from the source, and Covenant was his return to that, albeit on a much bigger scale than Star Beast**. Scott set out to make the space-bound horror of the original 1979 film, with the scope of Prometheus. That's what Covenant is, and largely he succeeds with that.

The film opens slowly and builds towards the inevitable action packed clash between human and xenomorph, with some androids thrown in for complexity. It isn't scary, though I didn't find Alien scary, but it is tense and the action and gore are top notch. I also like the casting; Katherine Waterston is great and I very much enjoy Danny McBride in a straight role. The Fass got grief for this and Prometheus, but I like him in both. If I'm picking holes, which I am as it is kind of my raison d'etre with Bedsit Cinema, Scott's obsession with a close up is a bit annoying and relies on CGI too heavily for my liking But doesn't ruin the film.

Bedsit it? Yes. I enjoy the mythology Scott creates with this and Prometheus, even if it is a bit all over the place. The biggest down side to Covenant is that the Neil Blomkamp Alien film is on permanent delay, which I was looking forward to. Alien: Covenant is, while not groundbreaking, still a very good film. There aren't many films number six in a series which I'd give 7/10 to.