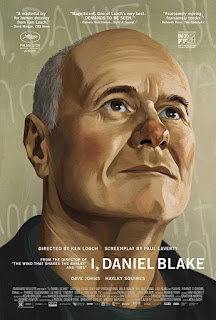 Tagline: Five taglines listed, all are simply acclaim for the film. I say simply, it's hard earned acclaim. But, I, Daniel Blake, Bedsit Cinema don't dish out love like it used to so it's nil point from me on the tagline front. Work for it, baby.

Premise: One man's tragic inability to fit into a system we created for him. WE CREATED.

Execution: Another of the “too angry to write near watching” films, along with Detroit.

I,Daniel Blake is 2016's best film, for me. Now I know and accept that it is dramatised, not a documentary, but you think any film isn't engrossed? You think I don't embellish my blogs? Of course I do! I'm not the friend-less loner I make out; I speak to my dad on the phone every now and then. Mum sometimes answers. The reason I, Daniel Blake resonates is it reflects reality in a way we can engage with, in the way films should do. At least it resonates if you have a fucking conscience. Which it turns out most of the country either don't, or are willing to forget they do.

Titular character Daniel is a Geordie-former-carpenter who after a severe heart attack is forced to rely on the benefit system. He's affable and upbeat, but lost in a system he doesn't understand. Now I've used this system, and they're cunts. Would you want to dish out sixty quid a week to the desperate? No, and imagine what kind of people their recruitment pushes attract. Yep. Not the world's brightest. I'm not saying these people are the problem, but if you put the less able free thinkers into a bureaucratic system, they'll abide by it.

Bureaucracy is just legislating for idiocy, run wild, overgrown and dangerously suffocating: admittedly because there are so many idiots. Because there are so many idiots, bureaucracy became a thing, because of bureacracy more people are able to "justifiably" act like idiots. It's a vicious cycle. Bureaucracy is a system someone set up. It is not an innate, unmovable set of rules, like mathematics. Idiots don't get that, see. Although to be fair, I don't get arithmetic.

I, Daniel Blake is so political, talking about it without losing sight of its message is hard work, much like Loach's other Palme D'Or (2006) winner, The Wind That Shakes Barley. Yes they are both brutal and inspiring and enraging. Yes I, Daniel Blake won awards, and the reason it did isn't sweeping landscapes, it is pure power. My notes are so angry, and won't make the cut, but suffice it to say the system is only an indicator or the problem. Look at the monsters upholding that system.

Bedsit it? You absolutely must see this film. If you still have a conscience, or any ability for empathy, I, Daniel Blake should piledrive through your personhood. Call me a liberal, fine. I'll call you a cunt back, though. 9/10 And mum please call me back yeah?