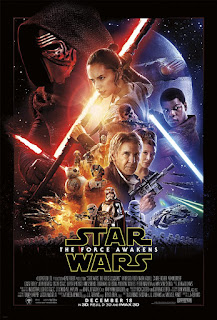 Tagline: Several listed, as one might expect given the publicity associated with the film. I’m going to pick,

“The Force is calling to you. Just let it in.”

Premise: More good vs evil antics from a long time ago in a place far away where technological and fashion continuity is shot to shit. All the old gang from the original Star Wars films are back. No, not those originals, they’re called the prequels, or episodes 1-3. The original, originals, episodes 4-6. You’re so 1999. This is episode 7, which was 2015. But in the past. And far away. Easy.

Execution: Given that The Last Jedi is upon us, I thought I’d rewatch entry number 7 in the Star Wars saga. I am a huge fan of the originals (4-6), but hated the prequels (1-3), so these new ones could have gone either way. I went to see The Force Awakens at the cinema, in 3D, sort of half watched it on Blu Ray and treated myself to a 3D Blu Ray of it recently. Only to discover you need a 3D Blu Ray player as well as a 3D TV. So I had to buy one, to enjoy the film as it was meant to be, this blog being called Bedsit Cinema, and you being my readers, I know all three of you wouldn't have it any other way. I do it for you.

When I finally had all the requisite (expensive and soon to be obsolete) equipment to watch The Force Awakens, I settled down for an evening, given it's two and a quarter hours long. I put all the lights off, my 3D glasses on, which were over my normal glasses and on top of these were my headphones as my neighbour quite reasonably complained about the noise from my telly. He then complained about hearing me talking to a friend at 8pm and the noise of my washing up, so I maybe don't need the headphones. Prick.

When George Lucas got epic wood about technological advances and re-released the original Star Wars films with updated graphics which largely looked out of place, it was only part of his endless finger fucking of his original work. The prequels which followed next were incredibly fake looking thanks to an almost complete reliance on CGI. Something I hate, and I used to work in post production. Star Wars died for me, I reserve the right to criticise something I've always loved if I don't like what it's up to. And so do my family.

Thankfully the first of the next three installments in the saga is great fun, even after two and a half viewings. It’s definitely a disengage-brain-film, never ask more than that from Star Wars nowadays. When the original Superman came out the tagline (which are older than I'd thought) was “You'll believe a man can fly”. In forty years, perhaps I'll look back at The Force Awakens and wonder what I saw in it, but for now, the effects carry it through. This is blockbuster film making done brilliantly, but don't for a second think that is a bad thing. Thematically a carbon copy of episode 4, but there were moments when I thought, "wow".


Bedsit it? As time goes on, Star Wars: The Force Awakens will likely lose points as what still makes me enjoy this so much is mainly the fact that it is a good Star Wars film, with great effects. Effects which even largely stand up at home. That’s a good thing for home cinema as it becomes easier to afford (I can afford a reasonable set up an I live in a bedsit). The Millennium Falcon swaggering across your vision in three dimensions is fucking awe inspiring. 9/10 (same as cinema rating)