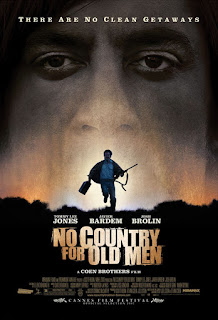 Tagline: “There are no clean getaways.”  I quite like this, it is abstract. No complaints here.

Premise: Josh Brolin's character Llewelyn stumbles upon some money which is clearly bad news. He decides to take it, and the ramifications are as absurd and unkind as life itself.

Execution: When I first saw No Country for Old Men, at the cinema with an ex of mine, I came out weighing up what I'd seen. I asked her what she thought it was about. “Well that guy stole money and got chased” was what I received by way of wisdom. Now not to shit on this girl, because she's lovely, and no mental slowcoach (I have previous in that respect) but she’s only half right. No Country is about a lot more than some stolen money. If the Devil's greatest feat was convincing you he doesn't exist, death's is at least equal to it, especially as death actually does exist. There’s tangible proof for death, unlike the devil, and science and the stock market.

Now, while I knew my relationship was dead in the water, and No Country was in that respect appropriate, coffin dodging is a subject we like to consign to the backwaters of mental engagement. On a species-wide level, denial of mortality is something we do in a variety of different ways, and this is what No Country for Old Mean is really about. I have seen one or two people die, and it is at once the most profound and impersonal thing you will ever experience, it is both very straightforward and paradoxically abstract. This absurdity is something I have been obsessed with since I was little. The obsession is probably my way of coping with the knowledge that I will expire. Well, that and wine.

No Country for Old Men is The Seventh Seal for the 21st Century, as Josh Brolin’s Llewelyn desperately tries to put distance between him and Javier Bardem’s harbinger of doom, Anton.  It is hugely entertaining at face value, and repeat viewings only add layers, or levels for my boxing friends, to its storytelling. The stolen money is a MacGuffin, a literal and figurative distraction and motivation. No Country for Old Men is exceptional film making.


Bedsit it? The beauty of No Country is you don’t have to sit and contemplate it all if you don’t want to. The layers exist and are there, they have their meaning whether you want to find and evaluate them or not. It is one of my favourite films ever. 10/10
Labels: Bedsit Bedsit Cinema Cinema Drama Film Josh Brolin No Country for Old Men Rated Review The Cohen Brothers Thriller