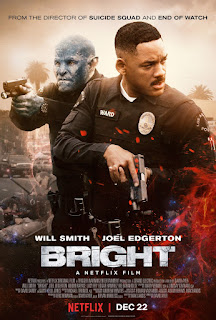 Tagline: There isn't one, which is lucky as those are further precious seconds I didn't waste on Bright. Unfortunately they are dwarfed by the hour and fifty seven minutes I spent watching it.

Premise: Cop buddy drama come comedy focussing on two cops in an alternate Los Angeles where Orcs and other fantasy creatures live alongside humans. There's prophecies and so on, some stuff happens. Your time is wasted.

Execution: Did you sit through End of Watch and think, “you know what would make this totally badass- Some orcs.”? No. No of course you didn't, because you're not on LSD. Or David Ayer, who clearly thought exactly that. Bright is essentially End of Watch, Ayer's earlier film, written by someone with an elf fetish. Namely Max Landis. Max's dad is John who directed An American Werewolf in London. Ayer is an inconsistent director, some films he's headed have been pretty good, such as Fury and Sabotage (I'm in a minority liking Sabotage), others have been poor: specifically End of Watch and Suicide Squad. Landis is similarly inconsistent in his writing.

It's a shame, because a good effort from both could possibly make the premise work. Sadly, in Bright, it doesn't. Bright is boring and bland, insipid even. Even with all the magic in the world, everything you could conjure, turning what they canned on this film, you'd still have a dud. It's as if someone watched The Last Witch Hunter and thought it was a throwdown for worst modern fantasy. Whoever didn't spot that the fantasy element didn't work in bright sunlight needs having a word with.

I did finish watching, which is something I suppose. Honestly though the CGI sucked, Will Smith is tiresome, the story massively predictable and not redeemed by any small glimmer of hope I desperately searched for while atching. What's worse for me is that, while the world they created is almost believable world, that hard work was squandered.

Bedsit it? If you subscribe to Netflix it's easy, and by all means put it on while you're doing something else. Bright is, though, unable to evoke a single decent memory of it in my head. Unfunny, not engrossing a looks bad. Similarly neither does it offend. For elf wankers only. 4/10
Labels: Action Adventure Bedsit Bedsit Cinema Bright Fantasy Film Film ratings Joel Edgerton Rated Review Will Smith