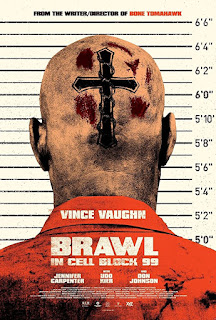 Tagline: None on IMDb, which I'm getting tired of. Don't tell me that like 3D, something I love about film is being eradicated as I begin to write about the subject?

Premise: Vince Vaughan is bald, so you know this a serious role. He's also, which is more well disguised in his comedy roles, fucking massive. His size and shiny dome here aide him to play a sort of born again Christian drug dealer hard man, which sounds like a paradox but trust me in America it really isn't. That place is nuts every which way: some great, some less so. He's having a difficult period with his wife. This difficult period gets harder when he's sent to prison. Timing, eh?!

Being stuck in the pen, Vaughan does the only thing a born again Christian drug dealer hard man in his position can do, he prays for his safety and his release. Nah I'm kidding. Can you imagine?! I mean morally it's probably sounder but this is a film and that'd be as boring as, well, as a man praying in prison for 132 minutes. He fucks shit up, which is why you're watching. I promise you there are no spoilers in this premise and if you think I have, the film ain't for you.

Execution: S. Craig Zahler, despite having a shit name- which isn't his fault- is pretty awesome. He wrote and directed the amazing Bone Tomahawk (2015) and, after Brawl in Cell Block 99, will likely next be helming a huge budget piece of shit over which he has no creative control and gets bent over by the studio because they want a name not an opinion. Then he'll go back to what he does best; having creative control. I hope I am wrong, by the way. I'm only 34 and I've seen this too many times. Joe Carnahan anyone?

Forgetting Zahler's future remakes of The Raid and the like, Brawl in Cell Block 99 is, if you are a fan of Bone Tomahawk, much the same. Positively. It's well acted, by which I mean none of the cast thinks they are in anything other than a retro-cheese actioner. Vaughan is good, subdued, menacing and for me: rather perfect. It's similarly paced to Bone Tomahawk, and just as terrifyingly violent.

Without giving too much away, the pacing is deliberate and shocking. You remember those coin charity donations you could get in the Tescos which you'd put two pence in and gleefully watch it swirl towards the void? It'd gather pace, energy, more and more enthralling. That's what Brawl 99 does. Zahler does violence like only the sickest pervert could conjure. That's a compliment.