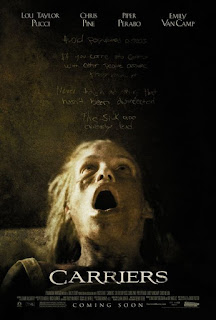 Tagline: “The rules are simple. You break them, you die...” A little bland, but functional.

Premise: Two brothers and their female companions (one romantic, the other one up in the air in that respect) are headed to the coast after a virus has wiped out large swathes of the population. This being America, a trip to the coast is full of hope and painted in sunshine, not the prospect of fish and chips in the rain and being attacked by seagulls.

Execution: What Carriers does well is create a sense of the grand scale of things without having to spend loads of money showing you it. It's obvious what the characters have been through, and clear the virus has been deadly and widespread, and that civilisation has largely collapsed. The actors are all of above average for what this type of film would normally expect to have, and that helps sell the premise, too. Christopher Meloni is a particular favourite of mine.

The initial vibe that Carriers gives off is one of reckless joy, the freedom of nothingness. An almost Dostoyevskian absence of God, or in this case society, making all things permissible. That allows a certain amount of playtime, of cutting loose and riding roughshod. Until the reality begins to kick in, and the realisation that you're now entirely and completely responsible for your actions. Retribution is swift and unjust. That's where Carriers sews the seed of horror.

Although it's a film about a deadly virus, with cadaverous half living the overwhelming fear, Carriers is less Dawn of the Dead, more It Comes At Night: Daytime edition. In fact It Comes At Night would make a great double bill with this. The emphasis in both is less on scares and more in the outright fear which arises from the void without society. With Carriers you're taken into that fear good humouredly, It Comes At Night, which I'll review properly soon, drops you straight in at full fear factor.

Bedsit it? For what it is Carriers does exceptionally well. It's not going to be for everyone but it offers an original take on the apocalyptic genre, by, essentially not being that apocalyptic as we have come to know/ expect. Works well on home viewing, too. 7/10.