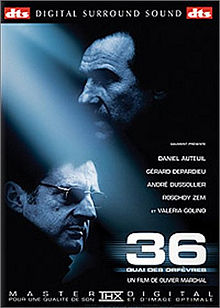 Tagline: Something in French, probably. IMDb doesn't give one. That's as far as my research goes, I'm a busy man.

Premise: Gerard Depardieu and Daniel Auteuil are two senior Paris cops, former friends now rivals. A violent bank robery team are shooting the shit out of the city, for what to me seemed like small amounts of cash, considering the expense of their approach, but whatever it's exciting. The two compete to catch the gang.

Execution: Plastered all over the Blu Ray box (obviously, my TV is huge and DVD looks taaaame now) were comparisons with Heat, and it's not an unkind one. Although 36 stands up on its own merit, it has enough similarities and roughly the same strengths, not to mention features two of a nation's best actors facing off. One thing 36 has which Heat doesn't is a real emotional intensity which gives it a soul.

The action in 36 is mostly superb, although some of the gunshot wounds were a bit below that standard. The acting is good, I think, I don't speak French, and the twists and turns in the story keep it tense right up to the end.

Addendum: If you thought a copper having a bottle of whisky in his office to drink was a bit unbelievable, wait until you you see Depardieu's drinks cabinet! Being Depardieu, however, it was probably real and contractual.


Bedsit it? Oh absolutely, if you like cop thrillers with plenty of action and can read fast enough for subtitles (my brother still can't). In all I absolutely love this film. This was my second viewing, the first being several years ago, and I'd forgotten a lot of what happened, which helped. 8/10
Labels: Action Bedsit Bedsit Cinema Depardieu Film Heist London Movie Review Subtitled Thriller