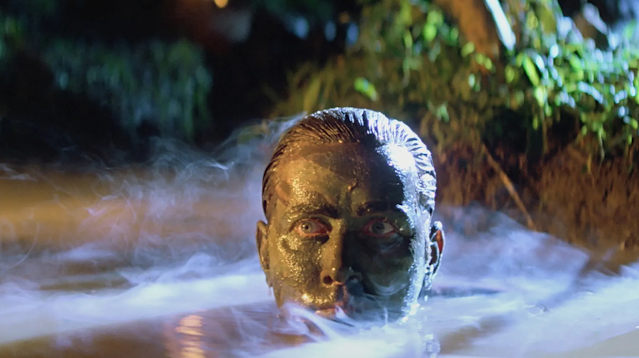 The creation of Apocalypse Now is absolutely fascinating; not only in the brilliant blend of almost disparate texts the filmmakers used as the genesis of one of the greatest and most iconic war films ever, but also because the actual making of the film itself was worthy of its own documentary. It is quite literally a journey from and on page to screen, in every sense. Apocalypse Now is one of those cinematic works which somehow crossed the finish line by luck and determination, and the world should be grateful it did.

“There is a taint of death, a flavour of mortality in lies - which is exactly what I hate and detest in this world - what I want to escape.”
Charles Marlow- Heart of Darkness

Joseph Conrad’s Heart of Darkness was released initially in 1899, though was serialised and updated and re-edited over the years. I read a version with the original text, an explanatory introduction and annotations through the text. It is short, technically a novella, based on Conrad’s experience on a boat in Africa in the late 1800’s. The story is fiction, though.

Essentially a terrifying travel tale, Heart of Darkness is, at its core, about the journey to a truth inside of us. It is also a criticism of Colonialism, yes, but what Joseph Conrad really digs into is a singular introspection into what makes us tick. Our fears and desires and lusts are exposed via Charles Marlow, the Captain of the Nellie on which Conrad’s persona is travelling away from England via the Thames on.

As the Nellie leaves Victorian London, our travellers listen to their prosaic, though long winded, Captain regale them with his story. Marlow talks of how he ventured into the depths of the jungle down unknown, deathly waterways populated by “savages”, accompanied by “pilgrims” in search of a lost ivory company manager, Kurtz. Lost and thought dead, it turns out Kurtz is much worse than dead.

It’s hard not to be in awe of Conrad’s penmanship but I don’t think it would be an anomaly to be put off by his style, it is dated and sometimes takes too long getting to the point. I get that’s part of it, especially once the action, or I suppose a better word would be conclusion grips. At least two thirds of Heart of Darkness is an ambling prelude to Kurtz. It is descriptive and interesting, offering some catchy quotes and political comment, but I’d hardly call it riveting.

Apocalypse Now takes the structure of Heart of Darkness, one man’s descent into the horror which lurks inside of us, and some of its themes are transplanted from Colonial England to American occupied Vietnam. Marlow says the following of a company of Ivory hunters, in Africa to loot and destroy; it is easy to see these people as the US Army in the film.

“Their talk however was the talk of sordid buccaneers. It was reckless without hardihood, greedy without audacity and cruel without courage. There was not an atom of foresight or of serious intention in the whole batch of them.”

In its best moments Heart of Darkness is engrossing, exciting and almost philosophical. Conrad boasts an envious vocabulary which borders on daunting. His imagery echoes in the cinematography of Apocalypse Now, especially as the film draws near to its denouement, but crucially it needed more flesh to it to become a serious piece of cinema. Enter Dispatches. 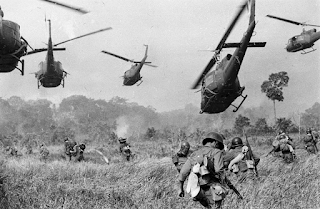 “Fear and motion, fear and standstill, no preferred cut there, no way even to be clear about which was really worse, the wait or the delivery.”
Michael Herr, Dispatches

Dispatches is journalist Michael Herr’s brilliant first person, non-fiction account of being embedded in the Vietnam War. Herr’s experiences and interactions with the US Army in those years is one of the best books on the war I’ve read, and I’ve read quite a few. It was published in 1977 as a single work, but Herr had been Esquire’s correspondent on the war from 1967-69.

As in Heart of Darkness, there is a strong theme of movement in Dispatches. Where it builds on Conrad’s work though, is in the multitude and variety of characters Herr encounters. The journalist is ever moving, from one horror or oddity to the next, never knowing whether he’ll be killed or “lose legs, arms or balls”. The grunts in Dispatches are so odd yet identifiable later on the screen, with their strange jargon and twisted emotional response to the violent middle ground between life and death they inhabit (“I’ve been scaled, man, I’m smooth” on a first kill).

The idiosyncratic vernacular of the soldiers, slang springing up in the moment, and complete absurdities which make perfect sense in the warped war laying waste to a beautiful country is what makes Apocalypse Now what it is. American arrogance, swagger and complete disinterest in the reality of the lives of Vietnamese certainly thematically harks back to the amoral, cavalier ivory hunters in Heart of Darkness.

“There would be a battle, a set-piece battle where he could be killed by the numbers, killed wholesale and if we killed enough of him, maybe he would go away.”
Michael Herr, Dispatches

It is the intricacies in Dispatches- the detail of a confused conflict and soldiers along with their character, the gallows humour and staggering from deadly engagement to deadly engagement on varying scale, which hit the screen most prominently. Lastly, the key thing Dispatches brings to Apocalypse Now, when spliced with Heart of Darkness’s introspection, is excitement. Bombs and guns and bullets and battles elevate Conrad’s core text to Hollywood levels of extravaganza and entertainment.

“Out there with the natives it must be a temptation to be God.”

There are three main edits of Apocalypse Now; the theatrical, Redux and the new “Final Cut”. I watched the Final Cut because it was the only one I’d not seen. Both it and Redux are expansions on the theatrical and personally I prefer their bigger story.

John Milius and Francis Ford Coppola wrote the screenplay for Apocalypse Now, and this achievement is what sets the film up with such depth and rich characters- and it doesn't hurt that Michael Herr himself wrote the narration. A great script, though, is just the beginning and the film’s eventual manifestation as cinema was as arduous as the film is excellent. Please read the brief piece linked here for more on the crazy process of filming it.

HEARTS OF DARKNESS: A FILMMAKER’S APOCALYPSE

Martin Sheen plays Captain Benjamin L. Willard, an officer deep in the throws of a boozy, borderline psychotic breakdown as Apocalypse Now begins. Forcibly sobered up, he is thrown into an odyssey, a trek through the war to assassinate a rogue Special Forces Colonel, Walter E. Kurtz (Marlon Brando). The characters all have a middle initial just to really assert their credentials as Americans. I assume. Willard calls himself the “caretaker of Kurtz’s story”, an opening admission of what Marlow becomes in the novel.

Kurtz has “gone native”, the comparison with Heart of Darkness’s Kurtz are direct, rather than influenced by, and Marlon Brando’s brooding, gravelly performance an inspired transference of the character from the page to the screen.

Where Heart of Darkness is laboured and verbose, Apocalypse Now is a demented road trip through a warzone and a hunt for a madman. Just as in Conrad’s writing, what the film asks at what point do you lose you and whether you only lose you to others- the mad aren’t mad to themselves. They have a point, a purpose, a reason in their minds. As the men he meets inevitably fade away from Willard's presence, he is truly left alone and his purpose ever less clear. 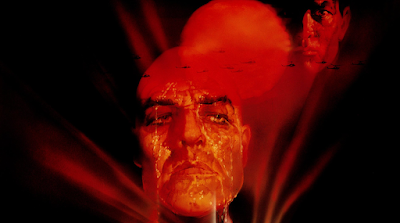 Colonel Kurtz makes sense without making sense - like the grunts in Michael Herr’s experiences. He is a high-brow, intelligent but erratic and violent product of war. Josephs Conrad's character was a maddened and violent product of the brutal ivory trade. Sheen’s voiceover and the second person narrative mirror Conrad’s story within a story style. The letters to soldiers which are read, as well as the menagerie of men Willard meets, give a scope and strange humanity to the film which set it in a larger, sprawling world.

The overlapping tales of the characters, each one with so much depth, mean there are rarely incidental appearances and even the supporting actors’ appearances are as iconic as the leads’ (Robert Duvall, Laurence Fishburne, Dennis Hopper).

Heart of Darkness is visually dark whereas Dispatches is not, and the film uses striking, brightly vivid visuals taken from both. Smoke, the colour of smoke, which is so prevalent in Dispatches; phosphorus and napalm, trees and huts and people combusting in myriad violence. Mud and trees, from both and the ever threatening emptiness and dangerous disquiet which can be just as traumatic, the grunts firing into the bushes aimlessly with no effect.

Scoreless in places, Apocalypse Now relies on sound design to create tension and fear incredibly effectively. Such is the length of the story, in places it is spectacular- astonishing scope and style that even the best, current day CGI can't better. There is breadth, scale and crucially, power in the action.

Just like in Heart of Darkness, Kurtz is a brief appearance, a fleeting but powerful force felt throughout but only experienced first hand late on. I could have done with more of Brando’s character, but perhaps that’s the point. Willard is sold down the river on a futile and languid lament on life. Apocalypse Now repeats the assertion of its predecessors-that man can adapt to killing with relative ease.

Empirically examining the structure of Apocalypse Now through the lens of Heart of Darkness and Dispatches, perhaps it is easy to see too much of the writing on the screen. It would be a discredit to the filmmakers to add one and one and make a cinema great, what Ford Coppola et al. created is s at once an expansive war film, and a microcosm of the conflict- a critique.

Apocalypse Now is erratic and never settled but with an unavoidable purpose within itself which slides and blends extreme events gently. After the smoke has cleared, the blood washed away and the corpses decomposed, the carriage of someone’s story, of their personality, is something even death cannot take.